Searching for the Chinese ‘Apple’ 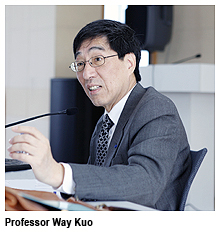 The president of City University of Hong Kong (CityU) gave two talks on quality and innovation in Shanghai on 18 and 19 April, respectively, at the invitation of the Shanghai Academy of Quality Management and the Shanghai Association for Quality.

Professor Way Kuo pointed out that a commitment to quality and innovation is the key to success, citing hot-selling Apple products as examples.

While most Apple products—iPod, iPhone, iPad, iMac—are part of the manufacturing process in China, they are created and designed by the Apple company, a brand as recognisable as Mercedes-Benz, Siemens and Leica from Germany; Toyota, Sony, and Cannon from Japan; and, more recently, Hyundai, Samsung and LG from South Korea.

“When can we have the Chinese ‘Apple’?” asked Professor Kuo, saying that creating such a company requires commitment to quality and innovation.

“Discovery and innovation are possible as long as we ‘learn from yesterday, live for today, hope for tomorrow’. And the most ‘important thing is not to stop questioning,’” he added, quoting Albert Einstein. 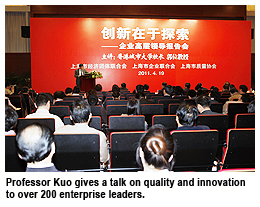 Professor Kuo used the recent Fukushima accident to illustrate the importance of quality and commitment to safety. China has 27 nuclear reactors under construction with another 50 planned in 2011, he pointed out.

“While nuclear energy is a mature technology, maintaining and enhancing nuclear safety awareness in the business culture is very crucial, and we must ensure that safety and quality would not be sacrificed in favour of cost-cutting and profits,” Professor Kuo said.

He added: “Nuclear safety is a cultural as much as a technical issue in China.”

The second-day seminar, presided over by Ms Tang Xiaofen, President of Shanghai Academy of Quality Management, was jointly organised by the Shanghai Federation of Economic Organisation, Shanghai Enterprise Confederation and Shanghai Association for Quality.