A strategic partnership to enhance collaborative marine studies between City University of Hong Kong (CityU) and Xiamen University has been signed.

The agreement partners up CityU’s State Key Laboratory in Marine Pollution and Xiamen University’s State Key Laboratory of Marine Environmental Science. It was one of 60 items signed at a trade and cultural promotion event hosted by a 500-strong Fujian delegation on 29 March. The event was called the Presentation on Fujian-Hong Kong Cooperation and Development. 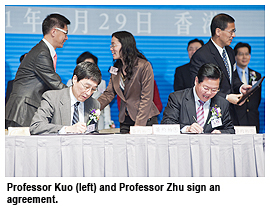 The strategic partnership will create synergy between the two laboratories and their physical and human resources. While CityU has attained advanced international status in marine pollution research, Xiamen University is a leader in marine environmental science and ecology systems. 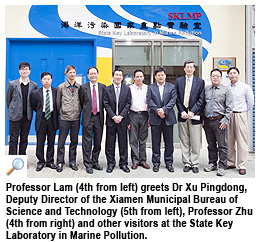 Professor Kuo said he hoped researchers from CityU and Xiamen University will contribute significantly to marine environmental protection and sustainable economic development as both fields are vital to the future of the planet.

CityU also agreed to set up the Joint Research Centre of Sustainable Development for Agriculture in Urban Areas with the Institute of Urban Environment at the Chinese Academy of Sciences. Rapid urbanisation on the mainland has raised concerns on food safety, giving rise to the urgent need to ensure that the production of quality, high-value agricultural products is safe and clean, precious water and soil resources in suburban areas are protected, and regulations on the use of arable land in urban areas are amended. 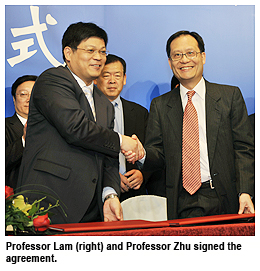 The agreement was signed by Professor Paul Lam Kwan-sing, Vice-President (Student Affairs) of CityU and the Director of the State Key Laboratory in Marine Pollution, and Professor Zhu Yongguan, Director General of the Institute of Urban Environment of the Chinese Academy of Sciences on 30 March.