A multimedia studio in the College of Business at City University of Hong Kong (CityU) was renamed in honour of the late father of a distinguished CityU alumna at a ceremony on 30 March. 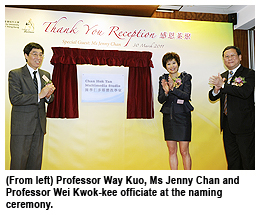 The Chan Hok Yan Multimedia Studio is named after the father of Ms Jenny Chan Pik-ha, a staunch supporter of CityU over the years.

“My father passed away before I graduated,” Ms Chan said. “Naming the studio after him is very meaningful for me as it implies that my father supports and is always with me at CityU, my alma mater.”

Ms Chan said she learned from her father that diligence and persistence are fundamental to success. “My father was fond of learning and kind-hearted, just as suggested in his name, and upheld the ‘never give up’ spirit. I have inherited his qualities and would like him to witness my success, especially academically, so I feel honoured that my alma mater has named the multimedia studio after my late father,” she said.

Officiating at the ceremony were Professor Way Kuo, President of CityU, and Professor Wei Kwok-kee, Dean of the College of Business.

Professor Kuo thanked Ms Chan for her generosity and said her donation was a gracious gift that would benefit many. “Jenny has not only devoted her time, effort and wisdom but also her financial resources. Her generous contribution will help nurture future business leaders who will devote their talents to the community,” he said.

Ms Chan has worked in the securities and finance industry for nearly 25 years. She is currently the chief executive officer of Lippo Securities Ltd, a wholly owned subsidiary of the Lippo Group. She obtained her Executive MBA degree from CityU in 2009 and has been committed to contributing her expertise and resources for the betterment of CityU since then.

Ms Chan is a member of the CityU Chapter of Beta Gamma Sigma and vice-chairman of CityU Eminence Society.

Ms Chan said she was grateful for the opportunities at CityU. “The EMBA has provided a great platform and network for exchanges with business elites,” she said. During her studies at CityU, Ms Chan was nominated to the Executive Leadership Programme of the University of California, Berkeley (UC Berkeley) based on her distinguished performance. She became the first Stanley Wang Fellow, a highly-regarded fellowship conferred by UC Berkeley. Ms Chan has been invited to serve as an advisory board member of the Asia Business Centre, UC Berkeley.