Perseverance and sheer hard work are the keys to success, according to Professor Yang Tong, Chair Professor in the Department of Mathematics at City University of Hong Kong (CityU), who has been awarded this year’s Distinguished Scientific Researcher Prize by the Croucher Foundation for his academic achievements. 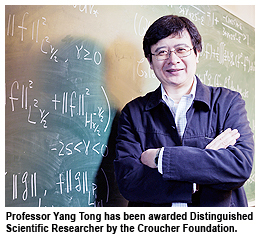 “99% of research might not actually lead to great discoveries, so we have to look forward to one ultimate success; that’s what drives us on,” he said.

The key to success might appear at the most unexpected moment, he added. One of Professor Yang’s most notable achievements leading to the award is a collaboration with Professor Liu Tai-ping, Emeritus Professor of the Department of Mathematics at Stanford University, which established a functional leading to the definitive settling of the well-posedness theory for hyperbolic conservation laws in one space dimension.

“I spent five years on this project,” said Professor Yang. “One day on a bus, a solution to the most important step of inquiry came to me in a flash!”

Undertaking research demands patience as well opportunity, Professor Yang added. Since 2006, he has been working with four other professors on a long-standing well-posedness and regularity problem for the Boltzmann equation without angular cut-off.

Professor Yang revealed an aptitude for math at an early age, mastering the first two years of the undergraduate mathematics curriculum in mainland China while he was still only a secondary school student. He experienced the Cultural Revolution while he was in his teens but luckily his mother taught math at a secondary school. Under her influence, he fell in love with mathematics and decided from a young age that he would devote himself to the discipline. 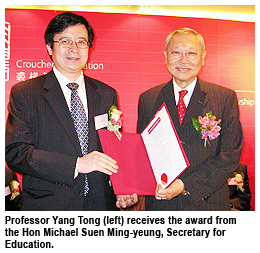 Professor Yang said he is very pleased with his Distinguished Scientific Researcher Prize and he thanked the Croucher Foundation and all the people who have supported him over the years, in particular Professor Lin Lungwei who supervised his master’s degree studies in mathematics at Sun Yatzen University and Professor Roderick Wong Sue-cheun, Vice-President (Development and External Relations) at CityU.

He also thanked Professor Edwin Pun Yue-bun, Chair Professor in the Department of Electronic Engineering and former Acting Dean of the College of Science and Engineering. Professor Yang said CityU has offered him ample room for research over the years.

Recipients of the Distinguished Scientific Researcher Prize can be relieved from teaching and administrative duties for a year. Professor Yang plans to devote himself to studying well-posedness and limit problems for the Prandtl equation and to coauther a book with another professor.

The Croucher Foundation was set up in 1979 by Mr Noel Croucher, one of the founders of the Hong Kong Stock Exchange. The Foundation established the Distinguished Scientific Researcher Prize in 1997 to honour scholars excelling in scientific research.