Three postgraduate students from City University of Hong Kong (CityU) have won a First Class Award at the 7th National Postgraduate Mathematics Contest in Modelling for their work on the early detection of mutated genes that can cause colorectal cancer.

Their analysis indicates that the accuracy of detecting such genes can be as high as 85%.

Gene mutation is widely recognised by the medical field as a cause of cancer but the difficulty is detecting which of the millions of genes in a human body might cause the disease. The challenge that the CityU team faced in the competition was how to identify the potentially dangerous genes using mathematical modelling. 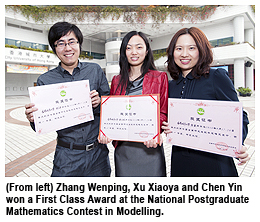 Based on data of thousands of actual cancer cases in mainland China and using mathematical analysis and new computer software, the students devised a model that helped identify 18 specific genetic groups that had a close relationship to colorectal cancer.

The judges’ decision to select the CityU team as one of 61 teams to win a First Class Award was based on the way the CityU students discussed and analysed the data and the innovative way they applied the new computer software to solve problems. The CityU students were also the only team to submit a proposal in English, and they are now revising their work for publication in an international journal.

CityU’s team chose colorectal cancer as the subject of its analysis because it is the number two cancer killer in Hong Kong. The hope is that the work will have a significant impact on society by preventing deaths due to the disease.

The students were thrilled with their win and thanked CityU for helping them to achieve their dreams.

“To prepare for the competition, we read more than 40 reference books in just four days,” Xu Xiaoya said, adding that CityU’s latest software such as Java, SAS and Matlab as well as the quality of professional education on offer on campus contributed to their success. “Winning the award raised my interest and confidence in research. It is a great start to my career.”

Zhang Wenping thanked his CityU teachers for providing him with a firm foundation of knowledge. “The competition required us to apply mathematical theories and methods taught during our studies at CityU,” he said.

Chen Yin said, “We initially just wanted to take part in the competition, not targeting to win anything. So we are very happy that our efforts have received this level of recognition.”