A series of public lectures at City University of Hong Kong (CityU) promoted transdisciplinary and cross-cultural research as part of the inauguration programme of the newly established Hong Kong Advanced Institute for Cross-Disciplinary Studies (HKAICS). 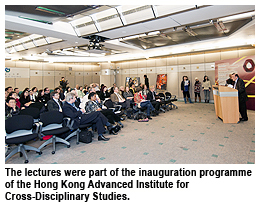 The lecture series, which took place between 13 and 14 January, kicked off with a reading by the poet Professor Li Shizheng, known by his pen name Duo Duo, Professor of Hainan University and Honorary Fellow of HKAICS. Professor Gregory Lee, Director of HKAICS and Dean of College of Liberal Arts and Social Sciences at CityU, then gave a short address about the new institute.

Professor Li was the 2010 winner of the Neustadt International Prize for Literature, the first Chinese author to win this prestigious prize, which is referred to as the “American Nobel”.

The first lecture was given by Professor Pauline Stoltz, Senior Lecturer of Global Political Studies at Malmö University, Sweden, on the theme of “Silent assumptions, assumptions on silence—Fiction, non-decision making and the politics of memory”. 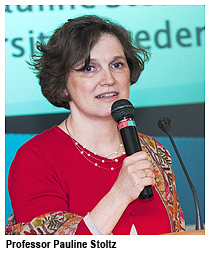 Taking the Netherlands as an example, Dr Stoltz discussed the silent assumptions behind post-conflict dilemmas. The Netherlands adopted a policy of non-decision making concerning World War II in the Dutch East Indies, she said, and in the subsequent decolonisation of Indonesia.

“One of the core arguments of transitional justice is that processes of justice and truth are necessary to achieve democratic governance and rebuild accountability,” she said. “Contemporary policy-makers therefore often believe that non-decision making leaves societies open for new conflicts.”

Over half a century later, novels dealing with the relationship between the Dutch East Indies, Indonesia and the Netherlands began to emerge. One of the recurring themes with regard to this historical trauma was silence.

“There are all kinds of assumptions about silence, whether it is good or bad to be silent about trauma experiences. Silence seems in the long run not to work for societies, but it does for some individuals,” she added. “Political scientists do not usually use literature or fiction as a source in their science.”

In her research, Dr Stoltz analyses both fiction and political responses to find out about the dilemmas and effects faced by victims, societies and policy-makers with regard to different policy strategies.

The second public lecture, titled “On China in Africa: Lessons learned”, was given by Dr Sharon Freeman, a successful entrepreneur, innovative business development strategist, and author of China, Africa, & the African Diaspora: Perspectives. 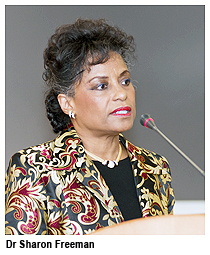 The Chinese presence in Africa has been growing in the past few decades in scope, depth and composition. As an advisor to several development institutions, government agencies and international firms, Dr Freeman pointed out that the reason for China’s success was that “China has a comprehensive Africa strategy whereas others, including the United States, apparently don’t.”

It is important to be reminded of what a strategy is: the science and art of using all the forces of a nation to execute approved plans, she said.

While Western perspectives on China’s aggressive investment in Africa and partnerships with African governments are often characterised by skepticism about China’s motives, the African perspectives are decidedly more positive.

Dr Freeman emphasised that a strategy founded on complementarity and solidarity was important. “First, China showed African leaders the kind of respect they wanted to be shown. Second, they let Africans lead and they followed, not the other way around.”

Although China’s engagement with Africa has yielded much success, some challenges have emerged that need to be addressed.

“Leaders, who are on the top of the pyramid, are happy. But tension is building among people at the bottom who are squeezed out of their jobs by the Chinese,” she said. Therefore, higher education plays an important role in the development of sustainable China-Africa policies and capacity building because “learning is the key to transforming their outcome”. 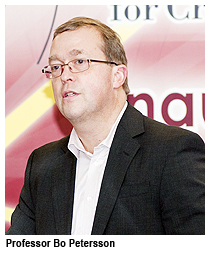 The third, and final, lecture, “Representations of socio-cultural risk: contemporary debates in Sweden” was presented by Professor Bo Petersson, Professor of Global Political Studies at Malmö University, whose special areas of interest include nationalism, multi-culturalism, negative images, stereotyping and xenophobia.

Increased migration flows in Sweden have put the nation under social and political pressure, prompting feelings of uncertainty among residents. Based on media sources and socio-cultural risk theories, Professor Petersson discussed ways in which public discourse constructs stereotypes and maintains psychological obstacles to inclusion. “The perceived challenges to ingrained habits and traditions may trigger their defensive mechanisms,” he said.

He cited examples in his book Stories about Strangers: Swedish Media Constructions of Socio-Cultural Risk to illustrate the socio-cultural risks perceived by the majority population as brought about by immigrants.

In one case, a local newspaper automatically associated crimes committed in the region to asylum seekers even though there was no evidence. In another case, people used “Muslim murders old Swedish lady “as a headline after a particular tragedy.

“The book is a collection of stories about the ways in which socio-cultural risk is perceived, constructed and narrated in the local media and what consequences this may bring,” Professor Petersson said.

“In Sweden, despite its reputation as a well-organised haven, there are elements of xenophobia, racism and scape-goating,” he said. In the public discourse, certain categories of immigrants, often refugees and asylum seekers, are depicted as threats to the values of the majority and are therefore increasingly perceived as socio-cultural risk groups.

“The manifestation of this banal nationalism may seem insignificant, as Michael Billig put it, but it is about drawing boundary lines between ourselves and the others who are excluded, showing that our perceived group is better than their group, which is consequently inferior,” he said.

According to Professor Petersson, there are four basic stereotypes about immigrants: perpetrators, victims, exotics and Hercules. “The media should be aware of the consequences,” he added. “An obvious solution is to write individual success stories about migrants who don’t end up in these four categories and who lead a normal life in a normal community.”

The lectures attracted students and scholars from various disciplines, and there was a hot discussion at each Q&A session.