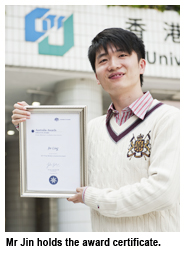 A City University of Hong Kong (CityU) graduate has realised his dream of studying sea turtles in Queensland after winning a prestigious scholarship.

Mr Jin Ling, an MPhil graduate from the Department of Biology and Chemistry, said CityU’s commitment to whole-person education was the key to getting the 2011 Prime Minister’s Australia Asia Endeavour Award.

Mr Jin will receive a scholarship worth HK$1.7 million from the Australian government and a coveted opportunity to conduct PhD research on sea turtles at the National Research Centre for Environmental Toxicology, University of Queensland.

Queensland is an important turtle habitat, supporting six of the seven existing sea turtle species, all of which are listed as endangered.

Mr Jin said environmental pollutants could be one of the key factors threatening sea turtles. “My research focuses on identifying pollutants that cause fungal infections in sea turtles in Moreton Bay, and studying how much harm pollutants do to them,” he said.

To Mr Jin, the scholarship is a dream come true.

As a child, he was fascinated by the process of life, the transformation of molecules into living organisms. His interest in life sciences later developed into a sense of responsibility to the environment. He has seen the impact of humans on the environment during overseas exchange programmes in Australia, Japan and the US.

“In Australia I saw how plants brought to Australia by British colonists threaten some Australian botanical species today. Even a small act by people can influence the environment greatly,” he said.

Mr Jin thanked CityU’s whole-person education programme for equipping him with both the academic and personal skills needed to achieve his dream. “I could not have won this award without the support of this University,” he said.

“While my studies at CityU equipped me with the necessary knowledge, scientific approach and thinking about environmental science, I also participated in the Youth Empowerment Project, which gave me the opportunity to tutor newly arrived families from the mainland,” Mr Jin said.

“I am proud to hear the good news from Jin Ling. I greatly appreciated his hard work and I believe this scholarship will be a huge boost for him. I wish him all the best for his studies in Australia,” Professor Lam said.

After completing his PhD research, Mr Jin plans to research how chemical pollution affects life on the planet.