The City University of Hong Kong (CityU) has received over $12 million funding support for developing a “smart antenna” system that will enable seamless 4G mobile communications.

The funding support to the 2-year antenna research project, which is undertaken by CityU’s State Key Laboratory of Millimeter Waves, was granted by the Innovation and Technology Fund. 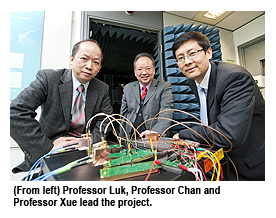 “This is the biggest funding the State Key Laboratory of Millimeter Waves has ever received since it was established in 2008,” said Professor Chan Chi-hou, project coordinator and Chair Professor of Electronic Engineering at CityU.

Together with government matching grant and industrial sponsorship, the project has received a total funding of $16 million.

The research will focus on designing a “smart antenna” system for controlling the signal transmission and reception installed at mobile stations usually fixed on the rooftop of a building.

“The antenna will be able to track the mobile users more effectively, providing them with maximum signal reception in the wideband, high-speed 4G communications mode,” Professor Chan explained.

Another challenge of the team is to ensure a stable reception angle for signal transmission.

“Our antenna is designed to provide a stable beam width. If the beam width gets unstable, the transmission angle may become narrower, resulting in poor reception for some mobile users,” said Professor Luk, who is responsible for the design of the antenna.

The conventional antenna has difficulty maintaining a stable and wide beam width for high-speed communications, Professor Luk pointed out. 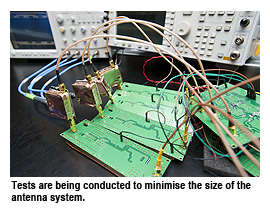 The team is also striving to work out a minimised design for the antenna system.

The current antenna system requires long copper cables connecting various components, including an antenna, a power amplifier and a large equipment box known as base station.

Signals become weaker while passing through the copper cables. To compensate for the signal loss, a high-power amplifier is used, which drives the operation cost higher, Professor Chan said.

“We are employing the technology of integrated circuits for radio frequency in redesigning the antenna system. The target is to make some of the equipment small enough to fit at the back of the antenna,” said Professor Chan.

The resulting design will reduce the use of copper cables linking the base station to the antenna, he said.

“All in all, we aim to provide an advanced antenna system that will enable seamless communications with more efficient use of energy,” Professor Chan concluded.