A vision for the development of cross-disciplinary approaches to the challenges society faces in the 21st century was outlined on 29 November by the Dean of the College of Humanities and Social Sciences at City University of Hong Kong (CityU). 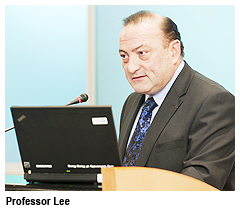 Drawing on the work of philosophers, artists, writers and scientists from pre-modern and modern Western and Chinese traditions, Professor Gregory Lee argued that society needs new and broader ways of thinking if it is to tackle the plethora of political, economic, social and environmental problems facing the planet today.

“In order to address such complicated questions, we need a collaborative, cross-disciplinary approach since current disciplines cannot singly imagine, tackle and resolve the complexity of today’s human and physical world,” said Professor Lee, who is also Chair Professor of Chinese and Transcultural Studies at CityU.

The talk, “Old Boundaries, New Horizons”, was the first in a new series of specially commissioned lectures to be given by leading scholars at CityU. The talks are an initiative of Professor Way Kuo, CityU President, and are named “The President’s Lecture Series: Excellence in Academia”.

“We hope to organise six to eight of these special talks each year,” said President Kuo after thanking Professor Lee for acting as the inaugural speaker. “This new series will give CityU students the opportunity to learn directly from some of CityU’s most prominent academics and engage in intellectual debate on major contemporary trends and issues, giving them a sharp edge to their professional education at CityU.” 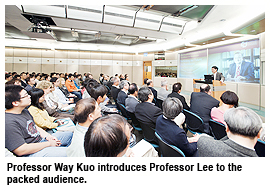 Professor Lee, who was recently made a Knight (Chevalier) in France’s Order of the Academic Palmes, one of the oldest chivalric orders in the world, for his services to education in France where he was vice president of the University of Lyons, echoed these sentiments in his talk. He argued that scholars and students need to reflect on the totality of human experience and knowledge in order to construct new, open yet rigorous strategies for rethinking the humanities and the future of the planet.

Today’s education systems, he said, tend to be defined by narrowly structured discipline-specific fields of study that seldom allow for cross-disciplinary interaction. Professor Lee said that we need to create, or re-create, an environment in which the humanities and the “harder” sciences co-exist and nourish one another.

By way of illustration, he noted that artists from the past were very often well-versed in the sciences and mathematics, citing examples such as Leonardo da Vinci, well known for his depth of scientific understanding as much as his aesthetic sensibility, and the British painter J M W Turner, whose work on light and colour was grounded in scientific enquiry.

Professor Lee said the introduction of general education courses and the development of the new 4-year curriculum was an ideal opportunity to encourage students to acquire a broader education that opened up new horizons and fresh perspectives. 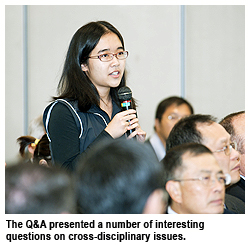 He also said the research agenda of CityU’s new Hong Kong Advanced Institute for Cross-Disciplinary Studies, to open in January 2011, will complement the new emphasis on merging subject areas to create new ways of thinking.

“The Institute will host external high-level researchers and support the University's own scholars who share a common desire to engage in trans-disciplinary and cross-cultural research within the College, across the University, and in partnership with regional and international scholars and institutions,” he said.

The Institute will privilege dynamic approaches to the Hong Kong Research Grants Council's prioritised research themes, in particular in the domains of public health and ecology, and other key research areas.

The Q&A session moderated by Professor Zhang Longxi, Chair Professor of Comparative Literature and Translation in the Department of Chinese, Translation and Linguistics, raised a number of related issues.

Questions touched upon the way the “hard” sciences and the humanities respond to rapid changes taking place in society due to technological advances; how to create space within a university’s structure to accommodate new cross-disciplinary research and teaching; and how to promote this new approach to stakeholders, in particular parents of prospective students.

Professor Zhang, explaining how Hong Kong is already responding to cross-disciplinary programmes, pointed out that the new bachelor’s degree in cultural and heritage management, a programme that offers at its core several subjects such as business administration, science, liberal arts and marketing, was heavily oversubscribed.

“We only have 25 places on the programme but we have more than 2,000 applications,” Professor Zhang said.