Professor Way Kuo, President of City University of Hong Kong (CityU), called for greater government support for the sciences at the University Presidents’ Forum on 21 October. 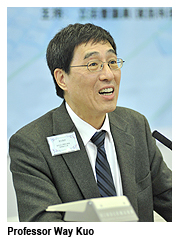 The forum was organised by TechMatrix Research Centre and CityU Postgraduate Association under the theme “Hong Kong Needs a Science and Technology Bureau”.

He said the territory has developed into an international financial centre due to its geographical location and its historical and political background. He added that Hong Kong has facilitated the socio-economic development of the mainland and promoted cultural exchange and communication between the East and the West for many years.

But he said it was time Hong Kong considered whether it can continue to benefit from its existing strengths in business and finance, two highly popular undergraduate majors and careers for local students.

“It wouldn’t be fair to accuse students of being short-sighted and aiming to make money quickly because they are influenced by the prevailing ideology of the whole community,” Professor Kuo said.

In fact, students may not realise the importance of scientific research for social development because it is not a significant part of government policy, he said.

Professor Kuo pointed out that governments in mainland China and other Asian countries have invested heavily in scientific research and education while Hong Kong allocates relatively fewer resources even though currently there is a budget surplus.

“Local industry would be transformed if the government provided more resources and formulated appropriate policies. In return, a more diversified and balanced industrial structure can be established for the long-term development of Hong Kong,” Professor Kuo said. 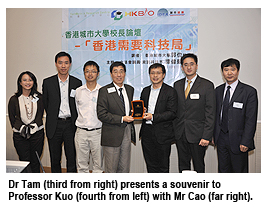 Hosted by TechMatrix Research Centre, the University Presidents’ Forum invites heads of local universities to share their insights on the importance of scientific research to social and economic development.

In attendance were Dr Hon Samson Tam Wai-ho, Chairman of TechMatrix Research Centre and Legislative Councillor, and Mr Cao Guoying, Principal Investigator of the Education, Science and Technology Department of the Liaison Office of the Central People’s Government in the Hong Kong SAR.