More than 100 members of staff, Council members, students and alumni gathered to hear senior management discuss issues related to the budget at City University of Hong Kong (CityU) at a Town Hall meeting on 19 October under the central message of achieving excellence through team work.

Professor Way Kuo, University President, said the purpose of the meeting was to initiate clearer lines of communication between members of the senior management team and the wider CityU community and to address matters of concern related to the four-month-old CityU budget.

"We want to have these Town Hall meetings once a year to look at issues of mutual interest in the spirit of openness," he said. 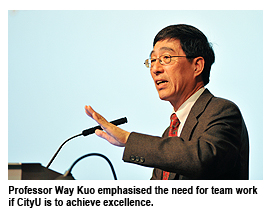 He emphasised the importance of producing students who are good role models, the drive for greater internationalisation, increasing internships and exchanges for CityU students, more student hostels and the double-cohort year of 2012.

"No matter what we do, we have to keep in mind our students, educate them as best as we can so they become mature members of the community," he said.

He pointed out that the University's income had remained stable over the past five years but expenditure had increased 30%. While the overall finances of the University remained healthy, he stressed the need to rationalise staff head count, especially in the run-up to the implementation of the new 4-year curriculum, for the sake of efficiency and to ensure a balanced budget. 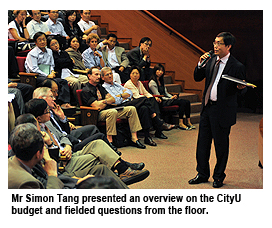 Staffing issues were raised during the Q&A session following Mr Tang’s presentation with one member of the audience asking for more information regarding staff hires and retention for the double-cohort year of 2012.

"We have earmarked funds for additional staff to help cope with 2012," Mr Tang said in response.

Professor Arthur Ellis, Provost, added to the reply that the University will hire more staff for 2012 and that senior management was currently investigating precise numbers for exactly how many new staff would be needed.

"We need to think about attracting high-calibre candidates, though it may take time to identify the right individuals and bring them onboard," he said.

Strategies that the University was looking at to help with staffing issues for 2012 include inviting academics to take planned sabbaticals at CityU in 2012 to help with teaching duties and utilising IT options for facilitating teaching, the Provost explained.

In addressing another question from the audience about staff numbers, Professor Kuo said senior management were currently trying to establish how many academics, how many administration personnel and how many students CityU should have.

"We have been doing well on an ad hoc basis, hiring when we needed to, but now we need to define how many staff and students we need," he said. He went on to say issues related to staff numbers, the double-cohort year and the budget were all inextricably linked with the variables of limited space on campus and the overarching need to provide students with a high quality education.

"We are not a for-profit organisation and our priority is educating our students to the best of our ability while at the same time balancing the budget and retaining and hiring high-calibre faculty and staff," he said.

Other concerns from the audience related to the timeline for hiring new staff to cope with the extra students in 2012, competitive bidding for what is thought will be 7.5% of first-year-first-degree (FYFD) places as stipulated by the University Grants Committee, academic vs administration issues and the setting of departmental budgets.

Wrapping up the meeting, Professor Kuo said the next couple of years were going to be challenging and he urged the CityU community to work as a team and to embrace diversity.

"A basketball team can’t depend on just one player. The whole team needs to play well together," he said.