Food and philosophy at Alumni Forum

More than 100 alumni savoured the philosophy of life and sampled concepts of management at a forum organised by City University of Hong Kong (CityU) on 27 September.

Before the event began, Professor Kuo showcased his culinary skills by preparing a hot and sour soup. He said he developed his interest in cooking at a very young age. As a child, he liked to go to the market with his mother, and still likes to shop for food when he has time.

“The different experiences in our life are very much like the mixed flavours of a hot and sour soup. Only after experiencing all the flavours of life can we become better and stronger. Therefore, we should not easily give up when facing difficulties,” Professor Kuo said. 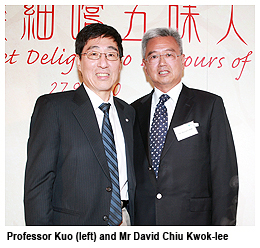 The response was overwhelming when alumni were invited to bid for Professor Kuo’s dish. Mr David Chiu Kwok-lee, an EMBA graduate, outbid his fellow alumni with a $100,000 donation. The money will be used to support alumni activities and services.

Professor Ma said his family had been poor when he was growing up but they were very close and always optimistic about life. Poverty could drag a person down, he said, but it could also motivate a person to succeed. 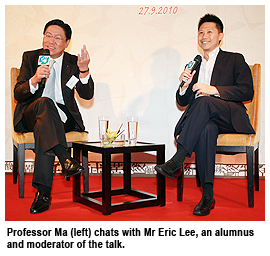 “I strongly believe in the pivotal role of education. Take me as an example. I could only improve my family’s situation by acquiring new knowledge and expanding my views through education. Hence, we should cherish all learning opportunities,” Professor Ma said.

Looking back at his career, he said he had joined the civil service out of a sense of mission. He had received public assistance when he was growing up and he felt that he should give something back when he was in a position to do so. His six years in the civil service had been rewarding but challenging at times, he said.

“We can only live life to the fullest after we have experienced both the ups and the downs. After that, we learn to better appreciate the world around us,” Professor Ma said.

The aims of the forum, organised by the Alumni Relations Office, were to strengthen bonds between alumni and the University, develop long-term relationships and boost CityU’s development. The University will continue to invite distinguished guest speakers from various sectors to help alumni acquire new knowledge and expand their social networks.