President shares observations on tertiary education and the community 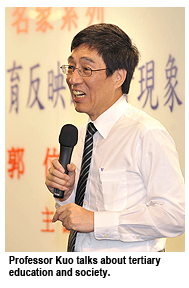 Professor Way Kuo, President of City University of Hong Kong and an Elected Member of the US National Academy of Engineering, offered a series of observations on the tertiary education sector and the community at the invitation of both Kwang Hwa Information and Culture Center and Asia Pacific Taiwan Federation of Industry and Commerce on 6 August.

Professor Kuo began his talk by suggesting that Hong Kong society may seem overregulated. After two years working here, he said that Hong Kong had many rules, regulations and big principles plus a plethora of public service announcements and guidance on lifestyle, many of which people tended to ignore in their daily life. He said that these kinds of principles were uncommon in the US, where Professor Kuo lived for 30 years.

Professor Kuo then switched the discussion to the division of education and politics. “In pursuing democracy, we should not forget moral principles nor codes of ethics,” Professor Kuo said. “Universities are like a mirror of society. A tertiary institution has well established regulations and systems, but confrontation, anonymous letters and high emotions occur quite frequently on campus.”

He suggested that the autonomy of the education sector, free from political interference, is the norm in the rest of the world, and argued that Asian universities trail their Western counterparts in terms of teamwork and the integration of teaching and research due to significant levels of political influence, he said. 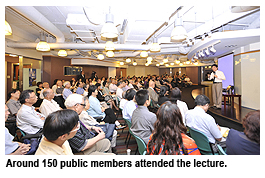 Nevertheless, Professor Kuo said he believed Asian countries will surpass developed countries in the West through hard work. He cited a story of the former Chinese Premier Zhou Enlai meeting Richard Nixon, the first US president to visit China. When asked why Chinese people often bend when walking whereas Americans have much straighter backs, Premier Zhou said, “People need to bend as they go up a slope, but they straighten as they go down.”

Professor Kuo then told a story about Henry Kissinger, the prominent US diplomat, to explain how education should be independent from politics. Initially a professor at Harvard University, Kissinger left the education sector for public office. After completing his terms as National Security Advisor and Secretary of State, he wanted to return to Harvard. Although he had attained a prominent reputation in the political sector, his request was rejected on the grounds that he had not conducted any recent academic research.

Professor Kuo further pointed out that although the 21st century represents an era of rapid high-tech development, the Hong Kong economy relies heavily on the service industry, making business programmes hot picks. Science and engineering programmes are often students’ last choice even though science and engineering graduates enjoy bright careers, even in Hong Kong. The era of globalisation means there is a strong connection between Hong Kong and the mainland as well as other countries, providing plenty of opportunities for graduates in these fields. 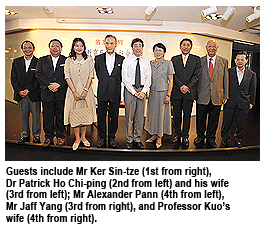 Professor Kuo added that Hong Kong should do more to promote internationalisation than simply focusing on the teaching of English.