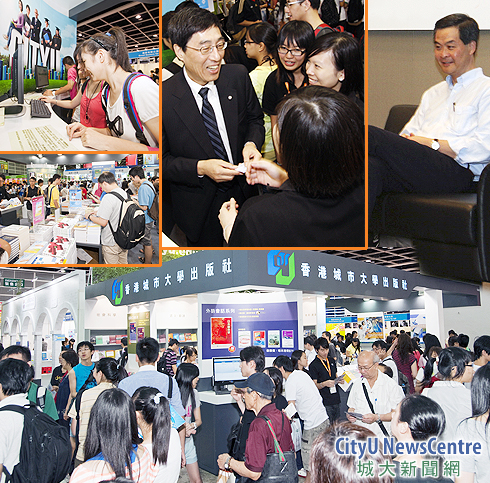 Members of the public have been treated to new titles, displays and a quiz courtesy of City University of Hong Kong (CityU) Press at this year’s Hong Kong Book Fair.

The publishing arm of the University, manning its largest ever booth space in a dozen years that it has been participating in the Fair, launched ten new titles, including four in the Understanding Asia series and two in the Caring for Youth series, plus new volumes in its foreign language series. CityU Press also initiated a promotions page on Facebook to attract more interest from fans.

The Hong Kong Book Fair, taking place this year from 21 to 27 July, is an annual fixture in the calendar for publishers based in Asia. The theme for 2010 is “Reading the World, Writing the Future”.

Among the visitors to the Fair were Professor Way Kuo, University President; The Hon Leung Chun-ying, Council Chairman; and Mr Lam Chiu-ying, former Director of the Hong Kong Observatory.

Mr Leung and Mr Lam both spoke about climate change at the “Caring for the World” seminar series at the Fair on 24 July. Mr Leung also spoke at the “Hong Kong is Home” seminar on 25 July, introducing his new book and sharing his thoughts on how to encourage more people to make Hong Kong a better place to live.