Two delegations of mainland journalists vistied City University of Hong Kong (CityU) and toured teaching and research facilities on campus on 5 July, which helped enhance CityU’s ties with the media on the mainland. 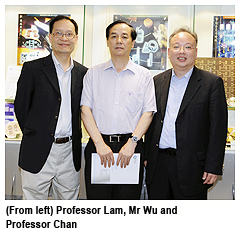 Their tour included a visit to CityU’s State Key Laboratory of Millimeter Waves. This facility focuses on research on the principal theories and applications of millimeter waves, which has implications for the development of communication technologies. 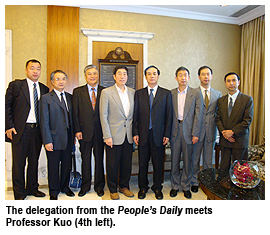 Professor Way Kuo, CityU President, held a breakfast meeting on 3 July with the People’s Daily delegation, but was unable to attend the campus tour on 5 July.

During the campus tour, Mr Wu praised the University for nurturing talented students and researchers over the years and for contributing to China’s development.

Another group of mainland journalists, 22 delegates in total, visited the University in the morning. They exchanged views with CityU hosts, learned more about the admission of mainland students to the University and enjoyed a lunch gathering.

During the visit, Professor Chan outlined the University’s development, its recent achievements in teaching and research and the programmes jointly offered by CityU with tertiary institutions on the mainland. He also talked about the experiences of students from the mainland studying in Hong Kong and the different graduation pathways open to them.

The media representatives were keen to know more about the admission process, CityU’s programmes, tuition fees and the daily life of mainland students in Hong Kong.

Stronger ties between the University and the mainland have helped boost the number of mainland students coming here to study on undergraduate and graduate programmes. Similar visits in the future will help strengthen CityU’s profile with the general public on the mainland.