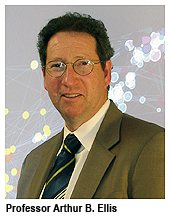 Professor Arthur B. Ellis, a renowned scientist and eminent academic leader, has been appointed by City University of Hong Kong (CityU) as the Provost. Professor Ellis, who will take up his new position in September, is currently Vice-Chancellor for Research and Distinguished Professor of Chemistry & Biochemistry at the University of California, San Diego (UCSD).
Professor Ellis received his bachelor’s degree from the California Institute of Technology and his PhD from the Massachusetts Institute of Technology in the US. He began his academic career with the University of Wisconsin-Madison in 1977 where he advanced to become Meloche-Bascom Professor of Chemistry and the Chair of the Graduate Materials Science Programme. He has taught thousands of undergraduates, mentored more than 50 PhD students and created innovative instructional materials, based on cutting-edge research, to enhance teaching and learning. In 2001, he received the US National Science Foundation (NSF) Director’s Distinguished Teaching Scholar Award for his outstanding contributions to teaching and research.
In 2002, Professor Ellis joined the National Science Foundation as Director of the Division of Chemistry with a mandate to strengthen research and integrate research and education on a national level in the chemical sciences. He successfully galvanized the chemistry community in fields like energy and catalysis and forged a network of international counterparts which led to a new programme for bilateral international collaborations for the US chemistry research community. For his work at the Foundation, Professor Ellis received the NSF Director’s Meritorious Service Award in 2004.
At the end of his term at NSF in 2006, Professor Ellis joined the University of California, San Diego as Vice-Chancellor for Research. Under his leadership, UCSD’s research enterprise has grown by nearly 40%, to $1 billion, including almost $160 million in stimulus funding from the US government this fiscal year. He also assisted the campus in fundraising and in establishing new global partnerships.
“Professor Ellis has distinguished himself as an international scholar and has been a major driving force behind the development of higher education both in the US and on the global stage,” said Professor Way Kuo, CityU President. “With his international background and administrative leadership experience, Professor Ellis will lead the Office of the Provost and help the University realise our vision as we continue to strive for excellence in research and professional education,” he added.
Professor Ellis is proud to accept the appointment: “I am delighted to be joining President Kuo, his leadership team, and the faculty, staff and students at CityU. The Strategic Plan that CityU has developed captures the energy, potential and creativity of the campus and Hong Kong, and I look forward to working with the CityU community to implement it.”
Professor Ellis’ appointment was made based upon the unanimous recommendation of the University’s Search Committee and Selection Committee after a vigorous global search process, a series of interviews and a forum.