Wei Hing Theatre was full of applause and swarming with the bustle of approximately 350 hall residents and guests on the colourful night of 15 April, drawn by the Inter-hall Singing Contest and Prize Presentation Ceremony of the Inter-hall Competitions, leading to the finale of the presentation of the Professor Edmond Ko Cup (2009-10). The great efforts of the competitors, the cohesive support of the cheering teams and the achievements of each hall expressed the nine halls’ spirit bonded with unity.

The Professor Edmond Ko Cup was set up to promote inter-hall interaction, and exchange between local and non-local residents. Students enjoyed as much as they learnt in organising the events and participating in the competitions.

In the midst of the Inter-hall Singing Contest, the cheering teams from the nine halls, wearing their respective hall T-shirts, jackets or specially designed accessories, held banners, waved illuminated neon sticks and chanted slogans. Dimple and Allan, the two great masters of ceremony, introduced each solo singer or group representing their halls, who caught the attention of the lively audience with their impressive performances. 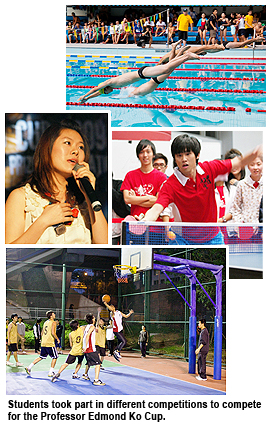 The prize presentations for the other seven inter-hall competitions - aquatic, athletic, badminton, basketball, photography, soccer and table-tennis - took place in between the singing. The prize presentations let the winners revisit the excitement and sportsmanship of the competitions. The audience from all nine halls felt a strong sense of belonging to the residence community as well as the spirit of interaction among halls and cultures.

When the results of the singing contest were announced, the cheering teams could not stop cheering. The HSBC Prosperity Hall and Jockey Club Academy Hall received the same scores from a panel of hall alumni. Their hall spirit reached its highest point when both halls were declared the Best Cheering Halls. The champion of the singing contest was Jockey Club Academy Hall. Jockey Club Humanity Hall was awarded the 1st runner-up prize, whilst Chan Sui Kau Hall and Lee Shau Kee Hall became the joint 2nd runners-up.

Eventually, the climax was reached as the overall champion of the Professor Edmond Ko Cup (2009-10) emerged. Jockey Club Humanity Hall captured the huge Cup for the second consecutive year. Overwhelmed with excitement, the Humanity Hall family showed their bountiful spirit on the stage while receiving the highest honour of capturing the Cup. The touching moment ended with words of encouragement from the Residence Master of Humanity Hall, Dr Elaine Au Liu Suk-ching, when she invited all residents to extend their attachment to their own hall to the other halls. The voices from all nine halls were full of love, unity and bonding on the basis of sportsmanship.

Indeed, all nine halls can be regarded as champions because of their united spirit and fruitful participation. Every single hall resident should be proud of the spirit and moral tone that illustrates the “Unity in Diversity” of this event.