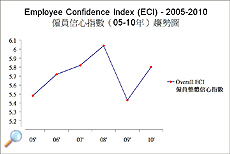 People in Hong Kong are more optimistic about job prospects this year, particularly in terms of expectations of pay raise and prospects for finding a better a job, according to a survey conducted by the Department of Management at City University of Hong Kong (CityU).

The Employee Confidence, Work Commitment and Work Value Survey 2010, conducted between March and April, covered 522 Hong Kong citizens in full-time employment (aged 18 or above). Respondents were interviewed by telephone. They were asked to express their views on employment confidence, work commitment and work value. The annual survey is one of several research surveys conducted by CityU to gauge the overall social and economic situation in Hong Kong, and offers detailed insights into how the people of Hong Kong view their jobs. The findings are intended to help employers adjust their human resources policies in tune with expectations and outlooks of employees.

The Employee Confidence Index (ECI) is measured on a scale of 0 to 10, representing ascending levels of confidence in terms of “Well-Being”, “Job Security”, “Job Prospects” and overall perceptions of the job market. The ECI mean increased from its record low last year by 0.37 points, to 5.8, suggesting a moderate level of confidence. Employees in the restaurant and hotel industry (6.15) reported the highest level of confidence, while those in the construction sector (5.35) reported the lowest level of confidence. Confidence in the overall job market, however, rose remarkably by 0.74 points to 3.97, though it was still moderate and below the peak experienced before the global financial crisis.

Compared with last year, there were no significant changes in the “well-being” component. Respondents remained largely satisfied with their relationships with colleagues (7.6) and were positive in regard to their job performance (7.23). Confidence in job security and about internal career prospects rose to 6.93 (from 6.64) and 4.07 (from 3.25), respectively. Respondents were perceptibly more optimistic about pay raise; expectations increased by 1.52 points, to 4.36. Perceptions of prospects of finding a better job went up 0.82 points, to 3.58. 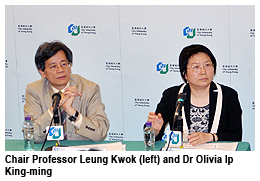 “The overall economic climate in Hong Kong has improved, and so has the unemployment rate. Confidence in the overall job market has bounced back from the record low experienced immediately after the global financial tsunami,” said Chair Professor Leung Kwok, Head of the Department of Management.

The survey was extended by including a few new questions where respondents were asked to indicate their level of agreement with a given statement on a scale of 1 to 5. They generally agreed that “work is one of the most important parts in my life” (average 3.7) and “I find my own value in work” (3.6). They were relatively neutral towards the statement “I work in order to enjoy material life” (3.05). In terms of work opportunity, respondents generally agreed with the statement “I have more chances of development in my work than my parents’ generation” (3.37).

Dr Olivia Ip King-ming, Associate Professor in the Department of Management, believed that senior employees considered their work more important because of their social background. “The material life of the senior generation, in its youth, was not as rich as that of the younger generations. Some of the senior people have had tough lives when they did not have jobs, and it is understandable that work occupies an important part of their life,” she said.