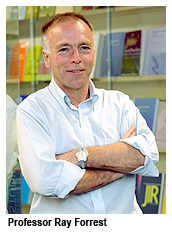 The Academy of Social Sciences, UK, has conferred the award of “Academician” on Professor Ray Forrest, Chair Professor of Housing and Urban Studies, Department of Public and Social Administration, City University of Hong Kong (CityU). The award is in recognition of his significant contribution to social sciences and its promotion.

The prestigious Academy of Social Sciences, regarded as the voice of the social sciences in the UK, is composed of some 700 academicians and about 40 learned societies. Individual social scientists from the academia and public and private sectors are conferred the title “Academician of the Social Sciences” to recognise the eminence of their work and contribution in the field of social sciences.

This award is not only a recognition of Professor Forrest’s work in the social sciences discipline but also symbolises the high level of academic standards achieved and being maintained at CityU.

Professor Forrest, an acclaimed scholar in the fields of urban studies and urban sociology, has published 170 publications on urban and housing issues, including books, journal articles and research reports. His research focuses on socio-spatial change in the contemporary city, urban political economy and housing policy, and has attracted research funding from a wide range of organisations.

He is the founding board member and co-editor of Housing Studies, the leading international journal in the field. He is also the co-editor of the Journal of Asian Public Policy and editor of the book series Housing and Society for Rutledge.

Professor Forrest joined CityU in 2008, after having had a long association with the University as Visiting Professor (1999-2001) and Adjunct Professor (2001-2008). He has worked at the University of Birmingham (UK) and the University of Bristol, where he was appointed as Chair in Urban Studies in 1994. At Bristol he was Head of the School for Policy Studies (2001-2004), Associate Director and Director of the Centre for East Asian Studies (2004-2008), and co-director of the ESRC Centre for Neighbourhood Research (2001-2005).