For students in mainland China intending to further their studies abroad, March is the month to make plans. Even with a violent sandstorm sweeping through 13 provinces and regions, students and their parents were undeterred, turning out in huge numbers to the 15th China International Education Exhibition Tour held in Shanghai on 21-22 March. 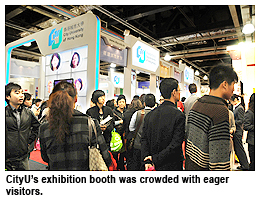 City University of Hong Kong (CityU) has long worked in close collaboration with Shanghai. Over the years, CityU has recruited many students from Shanghai and been involved in extensive teaching and scientific research exchanges with Shanghai’s tertiary institutes. In 2009 Professor Zhang Jie, President of Shanghai Jiao Tong University, received an honorary doctoral degree from CityU. CityU also has an office at Shanghai Jiao Tong University. 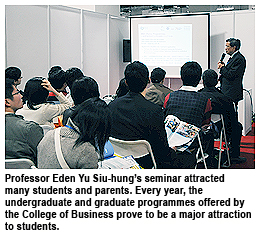 For his seminar, Dr Jones asked Dr Jackie Lou Jia, who recently joined his department as Assistant Professor, to serve as interpreter. Dr Lou came to Hong Kong from Shanghai after completing her middle school education. She received her bachelor degree from CityU, and was then admitted to Georgetown University, Washington, DC, for further studies. Happy to be back at CityU, Dr Lou was eager to share her study experience with middle school students in mainland China and explain to them how CityU had helped her open the door to the world.

Professor Chan introduced to the audience the recently launched Master of Science in Energy and Environment programme. In recent years, problems concerning the environment, energy resources and the climate have attracted widespread attention. Governments everywhere are taking practical steps to improve the environment and major business enterprises are increasingly in need of environmental professionals. Professor Chan pointed out that the master programme could provide these entities with the necessary professional knowledge to address environmental problems threatening the world. 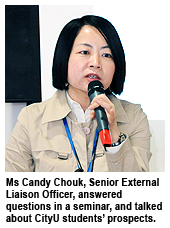 The China International Education Exhibition Tour, the largest annual exhibition of its kind on the mainland, lasts more than two weeks this year, and is held in Beijing, Chongqing, Shanghai, Qingdao, and Guangzhou. CityU representatives travel to these cities and take part in the exhibition activities. This year, Shanghai was the third city to host the exhibition, at which more than 300 tertiary institutes and educational bodies from 26 countries and regions were represented.

In addition to taking part in the Exhibition Tour, staff from CityU’s Mainland and External Affairs Office took the opportunity to visit Shanghai Middle School and four other elite middle schools in mainland China, detailing to their students and teachers the strengths of the University to enhance its image.