An innovative transgenic fish technology developed by City University of Hong Kong (CityU) that can efficiently detect estrogen disrupters in the environment is being exhibited at the Hong Kong Science Museum, showcasing the University’s latest environmental technology to the public. 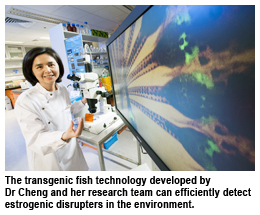 An increasing number of chemicals previously thought to be safe have now been found to be disruptive to the endocrine system. Pollution caused by endocrine disruptors, especially estrogenic disruptors, is threatening the health of wildlife and humans, and is becoming one of the most serious environmental problems worldwide. Developing a reliable method for accurate and prompt detection of estrogenic activity is a priority.

Developed by the research team led by Dr Cheng Shuk Han, Associate Head of the Department of Biology and Chemistry, this transgenic medaka fish strain can produce varying intensities of green fluorescence to reflect the estrogenic activity level. 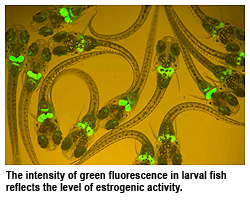 In addition to the high sensitivity and ease of use, this method is also fast, and very economical. The technique can be used for rapid monitoring of estrogenic activity of different brands of soymilk as well as cosmetics ingredients. Its applications may extend to monitoring the estrogenic activity of Pearl River and Hong Kong coastal waters in the future. The idea of using transgenic fish to monitor estrogenic pollutants can be further applied to develop other transgenic organisms to monitor other kinds of pollutants, such as androgenic endocrine disruptors, heavy metals and toxins. 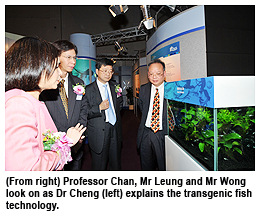 In his welcoming speech, Mr Leung said this exhibition is having an important effect on addressing the effect of pollution on our environment.

Professor Chan said CityU is in a leading position in environmental research with the establishment of the State Key Laboratory in Marine Pollution, Centre for Marine Environmental Research and Innovative Technology sponsored by the University Grants Committee, and the School of Energy and Environment.

The transgenic fish exhibition showcased one of the latest CityU research projects in this area. “It is hoped the exhibition can help raise public awareness of estrogenic pollution and contribute to the protection of the environment,” Professor Chan said.

The exhibition will be on show at the Science News Corner of the Hong Kong Science Museum from 5 March to 11 July.