City University of Hong Kong (CityU) has been awarded a grant of more than HK$8 million from the Research Grants Council (RGC). The University will use the funds to conduct a research project that assesses the reliability of electronic systems in order to prevent breakdowns that can lead to inefficiency or, in worst-case scenarios, fatal disasters.

The CityU grant was among the highest of the nine proposals from institutions funded by the University Grants Committee as part of the 2009-10 RGC Collaborative Research Fund.

Following a stringent review process conducted by international experts, the RGC funding will provide CityU’s project, Self-Cognizant Prognostics for Electronics-Rich Systems, with HK$8.17 million. Professor Michael Pecht, Director of CityU’s Centre for Prognostics and System Health Management (PHM), said the grant would help to ensure the centre is in a position to lead Asia Pacific and China in this technological field. 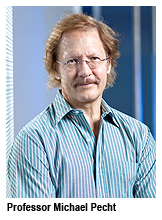 Electronic system failures can result in disastrous consequences such as air crashes, train collisions due to signal failures, power blackouts, computer and telecom system infrastructure malfunction, healthcare system failures and more. The impact and cost of such failures can be huge, not only in financial terms, but also in terms of human safety.

The proposed team effort, led by CityU in collaboration with researchers from The Chinese University of Hong Kong and The Hong Kong Polytechnic University, is a radically new approach whose research goals include effective and efficient reliability prognostics and health management for electronics-rich systems that continuously monitor themselves (i.e. self-cognizant) using algorithms that fuse sensor data, discriminate false alarms from actual failures, correlate faults with relevant system events, and predict failures in advance. The results will dramatically improve the safety, reliability and availability of systems, said Professor Pecht.

"Present methods for assessing reliability of electronics-rich system have fundamental flaws and the cost of failure is potentially very high,” said Professor Pecht. “The rationale for the funded project is that current methods for reliability assessment of these systems are based on traditional handbooks which cannot keep pace with new technologies, to account for complex usage conditions, and to address soft and intermittent faults, the most common failure modes in today’s electronics-rich systems.”

The impact on safety, service, production and cost is staggering, said Professor Pecht. “For example, the Municipal Government of Xiamen has been installing high power light-emitting diodes (LEDs) for street lighting since 2008. The manufacturer promised a system life of 100,000 hours (more than five years of reliable operation), but the Municipal Government discovered the lights failed within two to three months after installation. This is something the Hong Kong Government does not want to replicate,” he said.

CityU has set up a Centre for Prognostics and System Health Management with headquarters in Hong Kong and a laboratory in Shenzhen. This new centre, established in collaboration with the CALCE PHM programme at University of Maryland, came about in response to the growing interest in PHM implementation and reliability testing on the part of a large number of companies in China in avionics, aerospace, computing, telecommunications, LED lighting and the power and automotive industries.