Symposium focuses on language education beyond 2012

With the introduction of the 3+3+4 education structure due in 2012, all universities in Hong Kong are revamping and improving their curricula to make the four-year degree truly rewarding for their students. 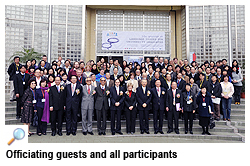 In his keynote speech, Mr Suen presented his views on “University language education and its impact on global competitiveness”. He agreed our era is facing great challenges but is also full of opportunities. “We need to do our best to ensure the workforce is versatile and possesses the requisite knowledge base to sustain Hong Kong’s continual development and maintain its position as Asia’s World City. We must be well equipped to exploit the rapid changes of the world economy and to play a part in China’s development as a key world power,” Mr Suen said. 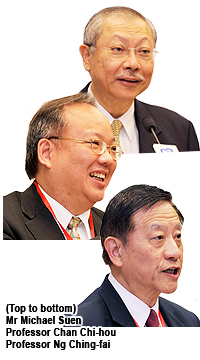 He said the new academic structure for senior and tertiary education, as part of our education reform, was implemented in part to respond to this need. Apart from enhancing student capacity for life-long learning and whole-person development, we also seek to nurture bilingualism and trilingualism among our young people, he said.

“The enhancement of language proficiency and development of a global outlook of the students requires the concerted efforts of government, the education sector, students, parents, and the community as a whole. With our joint efforts and the rich learning experiences provided by the new academic structure for senior secondary and higher education, I am optimistic the language standard of our university graduates will improve substantially in the years to come,” Mr Suen said.

In delivering the opening remarks on behalf of Professor Way Kuo, CityU President, Professor Chan stated that an important part of university education is creativity and critical thinking. Thinking can be productive only when it is supported by comprehensible expression. Thus it is crucial to improve the student language skills and, by implication, their judgement and critical thinking capabilities, he said.

Professor Chan said university education should not be limited to training young people with professional knowledge and skills in any one particular field, or even a few fields.

When people talk about language proficiency in Hong Kong, they often think of English proficiency, however the importance of having a good command of the mother tongue should not be ignored, he added. Students should place importance on English but not necessarily to the detriment of other languages. 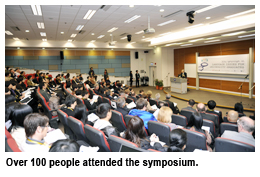 Professor Chan stressed that language proficiency is not built in a day. “Language proficiency takes years of practice and dedication and extensive reading and study, until we reach a certain level of fluency. But the promotion of languages will not achieve major results unless the education systems and structures are improved,” Professor Chan added.

Speaking at the opening ceremony, Professor Ng addressed the university language-teaching curriculum in the context of the life-long process of student learning. He said students, upon graduation, should possess the ability to communicate with others in languages other than their mother tongue. Therefore the provision of language curricula with an eye to the future is crucial, not only with regard to the present educational needs of the students but to their prospects after graduation across a wide variety of language contexts and environments.

In preparing for the implementation of the 3+3+4 reform, the Heads of Universities Committee (HUCOM) is organising a series of twelve symposia under the sponsorship of the University Grants Committee, to provide a platform for discussion among education professionals and different sectors of the community. This symposium is one of the instalments in the series.