Four City University of Hong Kong (CityU) students took part in the World Universities Debating Championship 2010 (WUDC) in Antalya, Turkey from 27 December 2009 to 4 January 2010. Here they recount their experience of representing CityU on the international stage.

Participating in this international tournament was both an honour to us as participants and a source of pride to CityU. During the debut appearance at international level for the English Debating Team (EDT), we had a rare and memorable chance to meet people from all corners of the globe, debating, exchanging ideas and enjoying social events.

During this wonderful eight-day trip we debated with teams from all continents and watched some great debates between renowned institutes during the finals. In terms of resources and the scale of event, local and regional championships do not compare to this kind of experience. Before this competition, it would have been difficult to fully comprehend the enormity of a world-class championship where 80 matches are held simultaneously and smoothly for nine rounds within three consecutive days. The credit for this goes to the dozens of Turkish helpers and more than 200 global debate adjudicators who ensured the event ran smoothly. 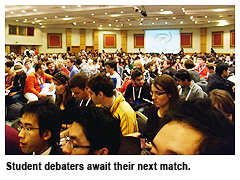 Various factors allow this prestigious competition to live up to its name. Among them is the quality of debaters, both in terms of their brilliant analysis of a debate motion, and also their personality. We still vividly recall the touching moment when more than 1,000 people in the hall stood and applauded for more than a minute to show their appreciation of the organising committee’s fine work.

One of our debaters, Fred Ho Hoi-fai, met debating friends from Queen’s University, Canada, where he had been on exchange last year. We also met many debaters with whom we have maintained contact even after we returned to Hong Kong. We were privileged to have Mr Sam Nelson, Assistant Professor of Communication and debating coach of Cornell University, USA, who is also a friend of our Singaporean debating coach, Mr Loke Wing-fatt, sit with us during formal dinners and provide feedback on one of our matches. Joining the high table dinner among more than 100 tables in the dining hall will long remain a cherished memory. 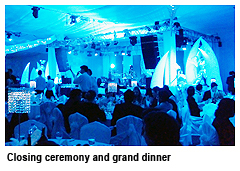 When it is taken into account that the CityU EDT has adopted the British Parliamentary format and debated for less than three years, competing in the WUDC was definitely a great leap forward.

We all benefited from the world-class international opportunities CityU offers its students. Fred expressed his thanks to the University for his global exposure in Australia in 2007 and his exchange to Queen’s University, Canada, in semester A 2008/09. The School of Law sponsored both Fred and Steven Liu Wai-hung, among other students, to study at University College, Oxford, UK, during the summer of 2009. Jacky Lam Hon-cheung had the privilege of going on an exchange to San Jose State University in the United States in semester B 2008/09 and significantly improved his global awareness and spoken English. Ken Li Kin-hang, one of our best English debaters, also enjoyed the exchange opportunity and exposure beyond Hong Kong during his tertiary studies at CityU.

The University cares about its students and this experience in Turkey further exemplifies CityU’s support of student activities in the global arena. 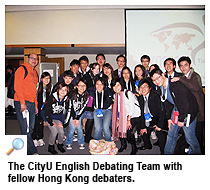 WUDC, colloquially referred to as the “Worlds”, is the largest intervarsity debating tournament, and one of the largest annual international student events, in the world. It is a parliamentary debating event, held using a variant of the British Parliamentary Debate format. Each year, the event is hosted by a university selected by the World Universities Debating Council.

The tournament this year was hosted by Koç University in Turkey and held at the five-star Maritim Pine Beach Club hotel and convention centre in Antalya. More than 350 teams participated in the three categories, namely English-as-a-Professional-Language (EPL), English-as-a-Second-Language (ESL) and English-as-a-Foreign-Language (EFL). All teams from the three categories competed in the same pool for nine preliminary rounds over three consecutive days before scores were calculated for breaks and further rounds.