A lighting management system developed by City University of Hong Kong (CityU) is transforming the environmental credentials of buildings by reducing electricity consumption from lighting by up to 40%. 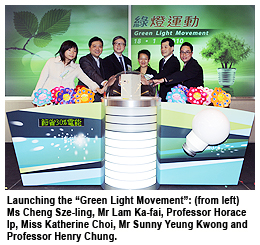 The system, developed by Professor Henry Chung Shu-hung, Associate Dean of the College of Engineering and Science of CityU, is fast gaining local and overseas recognition for its effectiveness. In one of Hong Kong’s public housing estates using the system, the average amount of electricity saved was more than 120,000 kilowatts per year, which is equivalent to about 90 tonnes of carbon dioxide emissions. This amount of carbon dioxide would need 464 trees to be absorbed in a year. At an average cost of $1 per kilowatt, it also equates to an annual saving of around $120,000.

A key policy of the Hong Kong Government is the promotion of more efficient energy use in buildings, which accounts for almost 90% of all electricity consumption in Hong Kong. The lighting management system is proven to save energy and reduce carbon dioxide emissions from buildings, showcasing CityU researchers’ efforts to protect the environment. 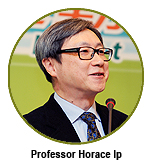 Speaking at the ceremony, Professor Ip said the “Green Light Movement” was intended to encourage youngsters to embrace the concept of environmental protection in their daily lives and to encourage them to be socially responsible.

“Energy shortage and pollution are two pressing issues for us to solve. In view of this, CityU set up the School of Energy and Environment last year to promote research into environmental protection and energy and to develop professionals capable of working within the industry sectors and benefitting society,” he added.

Officiating guests shared their thoughts on issues relating to energy conservation, including government support, private sector participation and light pollution. A presentation on the lighting management system was also made by Professor Chung. 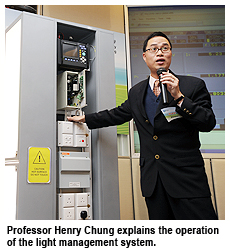 Professor Chung said the system could generally lower electricity consumption by 20-30% and, in certain circumstances, as much as 40%. It is being used in an increasing number of public housing estates in Hong Kong, and in private residential and commercial buildings locally, on the mainland, in Singapore, the Philippines and Australia.

In view of the fact that light pollution is a growing concern in Hong Kong, Professor Chung said it was hoped the system could alleviate the problem.

“We will continue contributing to the environment through our research but it is also important that we make energy conservation part of our daily life,” he added.