The School of Law (SLW) of City University of Hong Kong (CityU) held the Sixteenth Annual Goff Arbitration Lecture on 10 December, with Professor David D Caron, C. William Maxeiner Distinguished Professor of Law, University of California at Berkeley as the guest speaker. The lecture was titled "The Small, The Useful and The Impossible: The Experience of UNCITRAL in Revising its Rules". 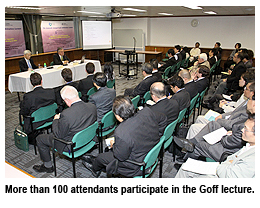 In his lecture, Professor Caron examined the revision of the United Nations Commission on International Trade Law (UNCITRAL) Arbitration Rules and the work of the UNCITRAL Working Group. He shared his insights in the vital role of UNCITRAL in revising arbitration rules, and discussed the challenges the system currently confronted.

"UNCITRAL has since prepared a wide range of conventions, model laws and other instruments dealing with the substantive law that governs trade transactions or other aspects of business law that have an impact on international trade," Professor Caron said.

Professor Caron pointed out the principle of revising arbitration rules was to maintain the structure of the text, its spirit and written style, while respecting the flexibility of the text rather than making it more complex. 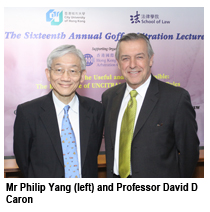 Mr Philip Yang, CityU SLW’s Programme leader of Master of Laws in Arbitration and Dispute Resolution, agreed with Professor Caron’s analysis. "There is a unique demand to revise the rules within the international commercial arbitration context from time to time. It is expected that continued growth in demand for arbitration services will be seen in the Asia-Pacific region. Hong Kong is an ideal place to become a hub for arbitration." He urged law students to keep pace with international changes in the field as well as in international law.