World renowned constitutional law and comparative law scholars from Australia, mainland China, Europe, Hong Kong, India, Japan, Macau, Singapore, and South Africa gathered at CityU for the conference to discuss varied attempts in different jurisdictions to exclude the protection of constitutional law and to explore theoretical and practical ways to address these challenges.

Professor Wang Guiguo, Dean of the School of Law, said, “We are pleased that the CityU School of Law is able to bring so many world class scholars to Hong Kong to discuss constitutional issues. Through this 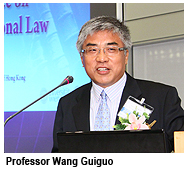 conference, scholars from different parts of the world exchange their own experience, knowledge and views in relation to constitutional and other issues. Such cross-cultural exchanges not only promote research among the participants which have an important bearing on the constitutional developments worldwide but also benefit our students directly.”

Highlighting the importance of the conference theme, Dr Surya Deva, Associate Professor at CityU School of Law and the Conference Coordinator, noted, “In the recent times, one common challenge faced by constitutional law scholars is how to deal with varied attempts of territorial and personal exclusions from constitutional law - whether it is limiting labour rights in special economic zones, offshore detention of suspected terrorists and asylum seekers, or the lack of constitutional rights protection against transnational corporations. The conference provided an opportunity to examine these issues from a comparative perspective.” 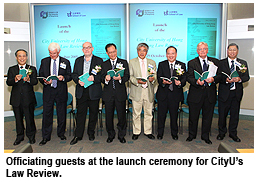 At the conference on 29 October, the City University of Hong Kong Law Review (CityU LR), a new biannual law journal edited by law students under the mentorship of experienced faculty members and guidance of an International Board of Advisors (IBA), was also launched. The IBA comprises distinguished scholars from leading universities such as Cambridge, Cape Town, Columbia, London, Oxford, Singapore, Sydney, Washington and Vienna. CityU LR seeks to publish papers on contemporary legal issues.

Professor Lam observed, “We hope CityU LR will help harness the writing, editing and research skills of law students. In addition, by publishing papers in CityU LR, students will be able to reach an international audience.”

Professor Wang said, “Our School aims at training students to meet the challenges arising from globalisation. One such endeavour is the publication of CityU Law Review ― our student-edited journal, which provides them with a golden opportunity to learn from renowned scholars through editing, apart from writing their own papers. It is a fine tradition of law schools in the United States and some other common law jurisdictions to publish student-edited journals. Our students have now contributed to the enrichment of this tradition. We are also honoured to have the support of distinguished IBA members advising the student editors on this project.”

Ms Zaineb Nasir, one of the three editors of CityU LR, said, “I am honoured and excited to be an editor of the first issue of CityU LR. It is a great learning experience in editing articles written by top law scholars from all over the world.” The Editorial Board of CityU LR consists of 22 law students, with Dr Deva acting as the faculty editor. Dr Deva, who initiated the idea of bringing out a student-edited law journal, noted that "CityU LR seeks to provide a platform for members of the legal fraternity in Hong Kong and overseas to engage in dialogue on contemporary legal issues of local and global interest.”