More than 80 officers and soldiers from the Hong Kong Special Administrative Region (SAR) Garrison of the People’s Liberation Army (PLA) led by Major General Zeng Qingnian, the Deputy Political Commissar of the PLA Hong Kong Garrison, visited City University of Hong Kong (CityU) on 16 October. During their tour around the CityU campus, they attended lectures, enjoyed lunch and took part in a friendly table tennis match with CityU’s students. The interaction between the PLA officers and CityU’s teachers and students served to provide each with insight into the other’s lifestyle. This year not only marks the 60th anniversary of the People’s Republic of China, but also the 25th anniversary of CityU, which has an added significance to the visit. 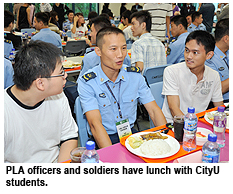 ag-raising display during the welcoming ceremony for the PLA delegation. At 8am, teachers and students assembled at University Circle with the PLA members to witness the flag hoisting. In a solemn atmosphere, the national flag, the regional flag of the Hong Kong SAR and CityU flag were slowly lifted as the national anthem played.

Professor Way Kuo, CityU President, said in his welcoming speech, “All members of the Hong Kong Garrison are elites of the PLA, who not only take up the responsibility of protecting Hong Kong, but also show strict discipline. Over the past twelve years, you have won acclaim from all Hong Kong citizens. We are glad to welcome you to the University and pleased that you can meet our teachers and students.”

Major General Zeng Qingnian said, “The gathering gives us a chance to take a closer look at CityU and learn more about the conscientious management of the University. CityU has a strong academic tradition and we are touched by the passion and devotion of CityU staff. The gathering encourages friendship and exchange of ideas. It provides an opportunity for us to learn from each other and excel together.”

After the welcoming ceremony, the PLA visitors joined City

U students at two lectures, one delivered by Dr Xue Quan, Associate Professor of the Department of Electronic Engineering, on “From the Use of the Beidou System in Rescue Work of Sichuan Earthquake to Today’s Wireless Communication Technology”, and the other by Professor Yan Xuetong, Director of Tsinghua University’s Institute of International Studies, on “The Rise of China and its Diplomatic Policy”. 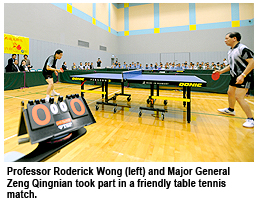 The PLA delegation visited the Applied Electromagnetic Laboratory at the Wireless Communications Research Centre to learn about CityU’s research on antenna technologies and radio frequency identification. They also went to the Centre for Super-Diamond and Advanced Films to learn about nanotechnology, nano materials and Organic Light Emitting Diode (OLED) displays. Their tour also included visits to the Student Residence and Run Run Shaw Library, which enabled them to have a glimpse of local university students’ study environment and cultural life.

After the campus tour, the PLA visitors had a friendly table tennis match with CityU staff and students. The contest began with a game between two senior officials from both organisations, Major General Zeng and Professor Wong, followed by games with selected representatives from the two sides. The atmosphere heated up with all participants’ cheering on their respective sides.

The visit concluded with a performance by the CityU Chinese Orchestra, who played four songs at the University Circle for the PLA delegation.