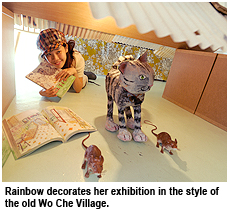 A 2008 creative media graduate of City University of Hong Kong (CityU), Rainbow Leung Hiu-man (pen name Lee Heung-lan), was selected as one of the eight winners in the Second Young Writers’ Debut Competition co-organised by Sun Hung Kai Properties and Joint Publishing. Rainbow received sponsorship to publish her first picture book - Wo Che Village, which was launched in the Hong Kong Book Fair earlier this year.

Recently, Rainbow was invited by Art & Culture Outreach (ACO), a non-profit art organisation, to display part of her original paintings to the public. Titled “Rainbow’s Wo Che Village Original Show”, the exhibition began on 19 September at ACO’s Wanchai headquarters and will continue till 18 October.

Wo Che Village is a work of art integrating paintings and texts that chronicle the people’s lives in Wo Che, a village in Shatin area, over its history of 200 years. As this is the home village where Rainbow was born and brought up, she portrayed in detail various facets of the villagers’ lives, told stories about the dear ones in her family, and related bits of anecdotes about her own growing up there.

Rainbow’s idea of making a book about her home place was inspired by a ceiba tree, near which she used to play as a little child. The tree was recently felled and removed to make way for development of the village. This aroused in her the desire to describe lives in Wo Che Village with her paintings and writings. 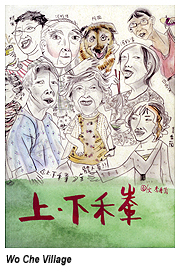 “With continuous development in the Shatin area, native villagers have been moving away into urban districts, and Wo Che village has been losing its original look and appeal,” she said. “Some of the things that I used to take for granted have suddenly disappeared. I really want to put them down in good records before they vanish for ever.”

Rainbow has developed a passion for painting since childhood, and some of the works in her present book are part of her graduation project at CityU. Though knowing her home place very well, she nevertheless did a lot of research and interviewed villagers when working on her book in order to describe in minute details things and people in the village. She also applied the story-telling techniques she learned at the School of Creative Media to her work on the book. 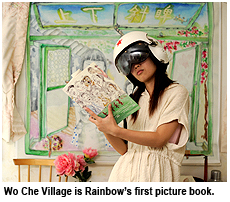 Rainbow was grateful to her project supervisor for the valuable advice she received. “My supervisor enlightened me with skills and techniques in producing documentary. Also, as I may have become too personal and subjective about the place where I grew up, she reminded me to observe and understand the villagers’ lives more from an outsider’s perspective in order to accurately reflect the distinctive culture of the village.”

Rainbow’s family and fellow villagers showed great support for her creative project, and they are delighted to see that the special characteristics of Wo Che Village can now get recorded and retained in such a wonderful book.

Further information of the exhibition is available at the following website: http://aco.hk/blog/index.php.