Influential politician speaks on the rise of China 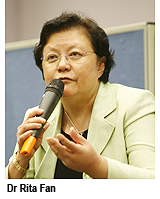 More than 100 students gathered at the City University of Hong Kong (CityU) Student Residence Multi-Function Hall on 17 September to meet one of the most influential Hong Kong politicians of the past two decades. Dr Rita Fan Hsu Lai-tai, currently a member of the Standing Committee of the National People’s Congress, former President of the Legislative Council and CityU Honorary Doctor of Social Science, was the third guest speaker in the Civility Dialogue Series.

The topic of the talk was “The rise of China & university students in Hong Kong”. Dr Fan said that China has done incredibly well in the 30 years since the launch of the Open Door Policy. “China’s gross domestic profit has increased tremendously. Other countries may need a century to achieve what China has done in 30 years.” Dr Fan added that she is not surprised that some countries in direct competition with China see the mainland as a potential threat.

Dr Fan said that despite all the success of our home country, there is still room for improvement. “China is not yet a middle-class economy. Many of our people are still living in poverty. During the course of industrialisation, pollution has become a problem.” Dr Fan believed these were the challenges ahead of the mainland and that Hong Kong had an important role to play in helping China do better.

Dr Fan compared China to our parents. “I love my mother,” she said. “But she’s not perfect. She also has some bad habits. It doesn’t detract from my love of her. I will try my best to help her become a better person. It is the same with Hong Kong - we learned so much from the west and we can now help our motherland to become a better place.” 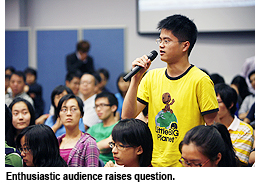 The gathering also touched on what university students could do to better understand China. Dr Fan asked the audience to think about what they wanted to know about China and why it was so important to them. “You should go out and meet more people from the mainland. When you want to know more about a place, you should start with the people first.” Dr Fan also encouraged students to learn from different sources and not to be confined to local newspapers and broadcast media. Dr Fan also believed that national education needed more of a push in local schools.

Local and mainland students showed great interest in the speaker and the topics discussed, making good use of the opportunity to ask Dr Fan about a number of political and economic issues in China.

CityU held the first of the Civility Dialogue Series