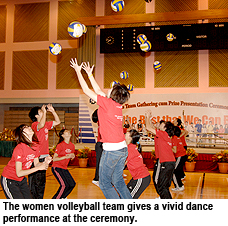 After an arduous training regimen over the past few months, CityU athletes competed with those from 10 other tertiary institutions and earned nine champion titles, eight second places, six thirds and three fourths. Eight CityU athletes were also named most valuable player (see table). This is the first time a tertiary institution has obtained both the overall men’s and women’s titles in consecutive years and is also the fourth time CityU has won both overall titles in the same year. 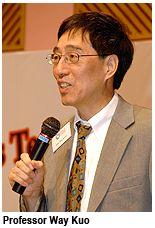 Professor Way Kuo, CityU President, congratulated the athletes on achieving such impressive results and thanked the donors for their support of sports education at CityU. “Our education focuses on the moral and intellectual, as well as sportsmanship and teamwork. To achieve success and recognition, athletes should learn to be a good team player,” Professor Kuo said. A number of scholarships were also presented to athletes to recognise their excellent performances.

In addition to the athletes’ personal strength and skills, high morale was also a key component in achieving outstanding results. Lam Nga-yee and Yeung Siu-lun, leaders of the CityU sports team council and athletes themselves, in the past year had organised orientation programmes and cheer squads to help foster cohesion between CityU athletes. 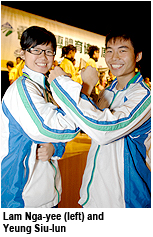 Lam Nga-yee, a member of CityU track and field, handball and table tennis teams, trains six days a week. “As an athlete, I truly feel that the mutual support among athletes can greatly increase our determination for success,” she said.

Yeung Siu-lun, long distance and cross country runner, helped organise the cheer squad for the final match of the men's basketball team. This was a crucial match where the overall championship title in men's division was to be determined. Accompanied by their resounding cheering, the team took the trophy home. “A basketball team member told me that the cheer squad boosted their confidence and helped them get through difficult sections of the game,” he said.