The School of Law (SLW) of City University of Hong Kong (CityU) organised a lecture entitled "Hong Kong's Contribution to China's Legal Modernisation" on 8 April hosted by Mr Daniel R Fung, Senior Counsel of the Hong Kong Bar, who is also former member of the Basic Law Consultative Committee and member of the SLW International Advisory Board. By sharing his experience as a veteran law practitioner, Mr Fung examined Hong Kong's contribution to the legal development of modern China.

"I was inspired by the speech of a Chinese government official about the opening up and reform taking place in 2009, which means it is good timing for the Hong Kong community to gain an understanding of how Hong Kong offers China a well integrated platform for legal modernisation," said Mr Fung.

Professor Wang Guiguo, Dean of SLW, added, "Hong Kong is the sole city under Chinese sovereignty with a common law system. With the rapid development of the global economy, it is important for law practitioners to understand Hong Kong's contribution to the modernising of Chinese law." 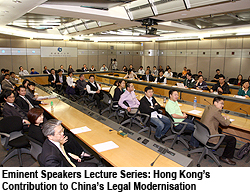 During the lecture, Mr Fung explained the importance of China understanding and integrating the common law system into its legal system. He also reviewed how China integrated the principles of Hong Kong commercial and civil law in late 1980s, including areas such as financial development, public law, domestic law and company law. He pointed out that all major international financial and stock markets are based in cities adopting common law, including New York, London, Singapore and Hong Kong. The rapid growth of China, especially in terms of its currency exchange and stock market, requires China to embrace the relevant principles and concepts of the common law system, he said.

Professor Richard Ho Yan-ki, Provost of CityU, also attended the lecture and shared his views on the topic.

Mr Fung has broad legal experience in Hong Kong and China and solid experience in lawmaking. He is Senior Counsel of the Hong Kong Bar, specialising in constitutional and commercial law. He served as a member of the Basic Law Consultative Committee (1985-1990) and Solicitor General of Hong Kong (1994-1998) revising the law ahead of the reversion to Chinese sovereignty. He was Chairman of the Broadcasting Authority (2002 -2008) and has also been a member of the CityU SLW International Advisory Board since 2008.

This lecture is an SLW initiative to enhance understanding of legal interaction between Hong Kong and China. Last year, SLW hosted a lecture on Chinese diplomacy and constitutional law and launched a master programme for practicing Chinese judges.