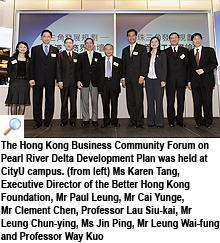 The Outline of the Plan for the Reform and Development of the Pearl River Delta, released by the State Council of the People’s Republic of China in January this year, will have a far-reaching impact on Hong Kong’s future development due to the close links between the Hong Kong industrial and commercial sectors and the development of the PRD Region. The forum served as a platform for business sector representatives to voice their opinions on the outline and talk about their experience and expectations and forecast future opportunities and challenges. 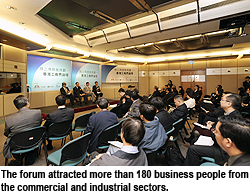 “Since its establishment 24 years ago, CityU has developed a close relationship with the mainland. The PRD region has been very important throughout Chinese history and its talents have had an enormous influence on the world. CityU delights in being the bridge of co-operation between Hong Kong and the mainland,” said Professor Kuo.

“The forum provides a platform for discussion and the opinions and views collected from it will help with the detailed planning in the future,” said Mr Leung Wai-fung.

Professor Lau believed the outline represented a great opportunity and marked an historical breakthrough. It mapped out the mutual benefits available to Hong Kong, Guangdong and Macau. “PRD Region is undergoing rapid economic transformation. The direction of this development required further exploration and the outline focuses on the next 30 years of reform,” said Professor Lau.

“The implementation of the outline reflects the full support of the central government for industries in PRD region. The industries should focus on transforming into modernised servicing and manufacturing industries as well as expanding the local market to maintain long term competitiveness,” said Mr Clement Chen, who believed the outline was an important milestone in the development of the region.

“The outline is an affirmation of the status of the delta. It can help strengthen co-operation between Guangdong, Hong Kong and Macau. I believe the Hong Kong commercial and industrial sectors will certainly benefit from it,” said Mr Leung Sai-wah.

Ms Jin Ping, Deputy Director, Hong Kong and Macao Affairs Office of the People’s Government of Guangdong Province, Mr Cai Yunge, Deputy Director, Development and Reform Commission of Guangdong Province, and Mr Leung Chun-ying, the Convenor of non-official members of the Executive Council were invited to deliver keynote speeches to introduce the outline background, co-operation between Guangdong and Hong Kong, and to share their views on the role being played by Hong Kong. 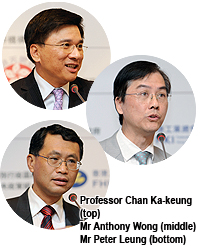 Participants shared their views with guests on the stage, bringing forward many creative ideas in the discussion sessions. Mr Shiu Sin-por, Member of the Central Policy Unit, delivered the closing remarks after the discussion.