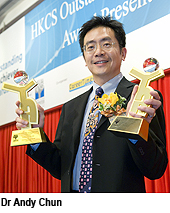 Dr Andy Chun Hon-wai, Associate Professor in the Department of Computer Science at City University of Hong Kong (CityU), received the IT Research Award and IT Professional Competency Award from the Hong Kong Computer Society (HKCS) at the Outstanding IT Achiever Awards 2008 ceremony held on 26 March. As a world-leading expert on artificial intelligence (AI), Dr Chun was the only recipient to be awarded in two categories.

The ceremony marked the first time HKCS has presented awards recognising individual achievement in IT. “There is no greater honour than being recognised by one’s own peers in the industry,” said Dr Chun. “The awards further solidify CityU’s reputation as one of the leading research centres in Hong Kong.”

The IT Research Award recognised Dr Chun’s contributions to AI research and its application to Hong Kong. The IT Professional Competency Award recognised his achievements in directing AI research towards practical everyday use through his AI system design and engineering development efforts. 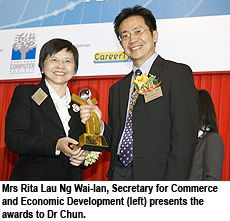 Dr Chun has been engaged in AI research and its applications for more than 20 years. His research focuses mainly on using AI for optimisation, scheduling, rostering and timetabling, as well as data-mining and knowledge management.

“AI can help organisations become more productive and effective. I use AI to maximise companies’ productivity and streamline operations to enhance Hong Kong’s competitiveness as an international city. But the ultimate benefit is, of course, faster and higher quality service to Hong Kong citizens,” said Dr Chun.

Dr Chun also expressed his gratitude to CityU for its strong support over the years. “CityU is quite a unique educational institute in Hong Kong. It not only nurtures future professionals and leaders, but also contributes to society by encouraging faculty members to perform world-class research that directly benefits Hong Kong, its citizens and beyond,” he said. 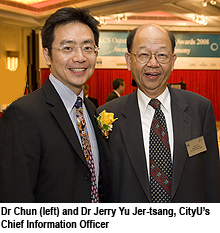 Over the years, Dr Chun has received numerous IT awards, including the 2005 Asia Pacific ICT Award and the 2005 IT Excellence Award. The Association for the Advancement of AI (AAAI), an international non-profit scientific society devoted to promoting AI worldwide, awarded him the Innovative Applications of AI Award five times over the past decade for the AI systems he helped to design and build. Among them were AI systems for the Airport Authority, Hospital Authority, MTR Corporation and HKSAR Government.

The Outstanding IT Achiever Awards 2008 recognised IT professionals who have made a significant contribution to Hong Kong society and economic development. It also recognised the value and influential role of IT professionals in industry and society. More than 100 people were nominated; only nine awards were presented in the four award categories, namely the IT Professional Competency Award, IT Research Award, IT Leadership Award and IT Project Management Award.