The 13th International Conference on Cantonese and Yue Dialects will be held at City University of Hong Kong (CityU) from 18 to 20 December. Among the topics to be covered will be the origins, evolution and applications of the Cantonese language, including the difficulties faced by native Cantonese-speakers in learning Putonghua (modern standard spoken Chinese) and written Chinese.

In addition to the conference, an exhibition of prehistoric rock carvings found in and around Hong Kong will also be held. About a dozen replica items will be on display. 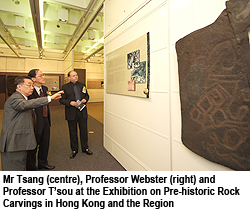 Mr Tsang pointed out that language could serve to reflect the attributes of the culture of which it was a part. “Cantonese undoubtedly plays an essential role in Hong Kong culture and is an important connection linking Hong Kong and Guangdong Province.” The conference adopts a multi-disciplinary approach to Cantonese, he said, adding that the rock-carving exhibition offered further substantiation of the research into the Yue dialects.

"The International Conference on Cantonese and Yue Dialects has been held 12 times, and CityU is pleased to have the privilege of hosting this year’s event. In addition to the conventional topics on the intrinsic linguistic properties of Cantonese, we hope to include Cantonese operas and songs, language acquisition and education, amongst others," said Professor T’sou.

CityU is committed to enhancing academic quality through the promotion of academic exchange. Scholars from mainland China, Hong Kong, Taiwan, Singapore, Canada, the US, Japan, Germany and the UK will participate in the 13th International Conference on Cantonese and Yue Dialects and present more than 80 papers. 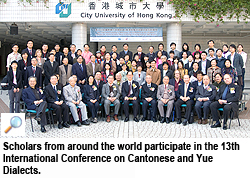 Professor Mai will discuss how the evolution and qualities of Cantonese help studies into varieties of Chinese in his address, Cantonese Studies and Chinese Linguistics. Professor Yung will deliver a lecture on Linguistic Tones, Lyrics and Melody in Cantonese Opera. In his keynote address, What Cantonese-speaking Children Can Tell Us About the Structure of Cantonese, Professor Lee will explore the linguistic development in children’s brains, analyse the linguistic patterns of native Cantonese speakers and discuss the difference between Cantonese and Putonghua.

The replicas displayed in the exhibition are borrowed from the Antiquities and Monuments Office. They represent the original rock carvings still on site in coastal areas of the territory, including Tung Lung Island, Cheung Chau, Big Wave Bay and Lung Ha Wan. Also on display are photos of rock carvings discovered in Zhuhai, Macau, Taiwan and Fujian, which reflect the civilisation of Baiyue peoples who lived in southern China more than 3,000 years ago.

For details of the 13th International Conference on Cantonese and Yue Dialects, please visit the website: http://www.rcl.cityu.edu.hk/yueconf2008.