Professor Way Kuo, President, City University of Hong Kong (CityU) was invited to be the speaker of the plenary session for 2008 CASE Asia-Pacific Advancement Conference (the Conference) and discussed with Professor Stephen Toope, President and Vice-Chancellor, University of British Columbia (UBC) issues about educational advancement. 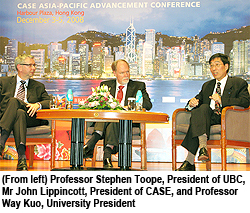 The economic environment suffering from the ongoing global financial crisis is hindering the advancement of educational institutions. The Conference focused on educational fund-raising in a depressed economic climate. Yet both presidents believed it is an opportunity now for institutions to plan for new developments.

“Universities are expected to be affected. The challenge would bring pressure, and the pressure would increasingly motivate universities to strive for better performance,” said Professor Kuo. Professor Toope also indicated that universities could take this opportunity to re-adjust their strategies and map out new plans of growth.

University education and research emphasise close links with the community, seeking advances based on societal changes. Universities are not commercial bodies, Professor Kuo said, and the resources they obtain are society’s investment in education to nurture talents. “University education aims to make contributions to society. It is misleading to describe their efforts to secure resources as ‘business-like’,” he commented. Citing the example of Canada, Professor Toope pointed out that business sponsorship for higher education could boost the progress of communities and increase research opportunities for faculty and students, hence benefiting both sectors.

The two university leaders agreed that, in this era of information, universities must make good use of all communication channels and keep close contacts with students, faculty, alumni and the communities. Both Professor Kuo and Professor Toope expressed their high regard for alumni’s support, which plays an important role in the advancement of universities.

CityU has established a new position of Vice-President in charge of development and external relations. Professor Kuo said: “Universities need professionals to communicate their visions and objectives to the community. As long as we concentrate on providing high-quality education, those interested in putting their resources to good use will know where they should go.”

2008 CASE Asia-Pacific Advancement Conference was held from 3 to 5 December. It was organised by the Council for Advancement and Support of Education (CASE), the world’s largest international association of educational institutions. This is the second CASE conference held in Asia.