As the pageantry of the Olympic closing ceremony in Beijing came to a spectacular end, the dreams of billions of Chinese had come true in the form of a hugely successful 2008 Olympic Games. Together with the rest of Hong Kong, City University of Hong Kong (CityU) has also been caught up in the Olympic fever for the past month. CityU students worked as volunteers at the 2008 Olympic equestrian events staged in Hong Kong, performing duties as ceremony hostesses, sharing with the victorious athletes the joys of their success and serving international royal dignitaries. The CityU campus also had a role to play, with the Student Residence Office providing safe and comfortable accommodation for overseas volunteers. 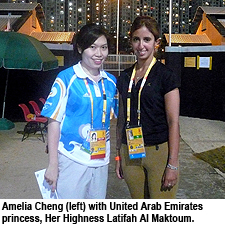 The efforts of the CityU community reflected the University’s enthusiasm towards contributing to the public life in Hong Kong.

“I never dreamt I would one day meet royal family members. She is a real princess, not just one from fairy tales!” exclaimed Amelia Cheng Sze-nga, a year 1 PCLL (Postgraduate Certificate in Laws) student, of her role at the Games. Her special task was to provide assistance to United Arab Emirates princess, Her Highness Latifah Al Maktoum, an equestrian rider.

“Wherever the Princess went, a flock of personal assistants followed. My job was to arrange transport and assistance for her within the large arena,” Amelia said, describing the royal as very friendly. 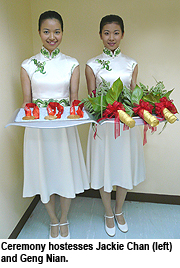 Geng Nian, a PhD student from the Department of Electronic Engineering, and Jackie Chan Chuen-ling, a year 2 student in BSoc (Hons) Social Work, were volunteer ceremony hostesses at the equestrian events. Geng Nian said the role was not an easy one as they had to wear make-up and start dressing up six hours before the medal presentation ceremony. But both agreed it was worth doing as it was an honour to participate in the Olympics.

“Sharing the excitement of the victorious athletes on the presentation stage was a rewarding experience,” she said..

Jackie's duties included leading the victorious athletes into the arena. “I was once responsible for leading in 15 athletes and their horses, where we were the focus of the moment. I felt very honoured but also nervous,” said Jackie. She added that the Games presented her with a valuable opportunity to learn more about matters of public etiquette and the importance of punctuality.

CityU students also filled other voluntary roles during the Games, such as reception and ticket purchasing. In addition, some students took part as torch bearers in Hong Kong and Inner Mongolia before the opening of the Games. 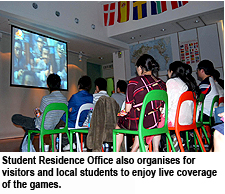