Since 19 years old, Johnny has written current affairs and travel articles for local newspapers and magazines, such as Hong Kong Economic Times and Hong Kong Commercial Daily. In addition, he has served as a speaker in University forum and organised general education workshops with education institutes to provide training for primary and secondary school students. 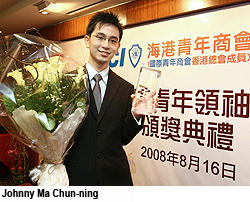 Of being selected as a young leader, Johnny said, "It signifies recognition by society of my hard work, as members of the judging panel came from various sectors." He added that science and technology has always been highly regarded by society, so he felt particularly gratified to win the award with his social science background.

Although his results in the Hong Kong Certificate of Education Examination were less than satisfactory, Johnny did not give up on studying. He worked hard to complete his associate degree and continued to study for his Bachelor of Social Science (Honours) in Asian and International Studies at CityU. He chose the University as it offered a broad-based course in international studies which would be useful to his future research work on general education.

Johnny said after learning various theories about international relationships and globalised economies, he wrote critical analysis and commentaries on diverse topics. He described how his teacher, Dr Justin Robertson, Assistant Professor of the Department of Asian and International Studies, often took students to old districts in the territory to enable them to study community development. A recent newspaper article he wrote on the administration of President Lee Myung-bak of South Korea was cited by the South Korean government website, clearly indicating how theory be applied to practice was appreciated. 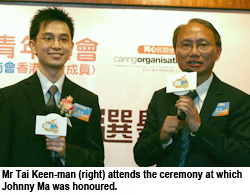 Johnny wished to express gratitude to Mr Tai Keen-man, Assistant Director of Radio Television Hong Kong for his role in the Young Leader award. Johnny regarded
Mr Tai as his mentor, and would consult him for advice whenever he had questions relating to his studies or about organising general education programmes. Despite his busy schedule, Mr Tai would offer valuable advice.

Johnny suggested in his paper submitted for the competition that the government should establish more channels to collect public opinions and make prompt responses. He proposed the government hotline "1823" be extended to all government departments and public organisations. Government officials or district officers should be responsible for answering citizens' enquiries and helping to solve their problems in the most efficient manner possible. Johnny even recommended Chief Executive Mr Donald Tsang Yam-kuen answer public calls with a greeting, "Hello, this is Donald Tsang. What can I do to help you?" Mr Tsang could then listen to the citizens and address their grievances.