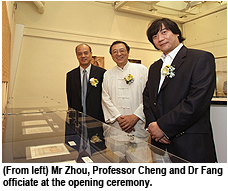 The Chinese Civilisation Centre of City University of Hong Kong (CityU) is holding an exhibition of ancient amulets entitled "Chinese Charms: Arts, Religion and Folk Belief" from 12 July to 24 August. The exhibits include about 150 artefacts dating from the Han Dynasty to early 20th Century.

The opening ceremony of the exhibition was held on 11 July at CityU Gallery. Officiating guests include Mr Zhou Yi, Director of the Research Institute of Culture and History, The People's Government of Guangdong Province; Dr Alex Fang Chengyu, Assistant Professor of the Department of Chinese, Translation and Linguistics of CityU and collector of Chinese charms; and Professor Cheng Pei-kai, Director of the Chinese Civilisation Centre.

The exhibits are categorised in terms of their content. They include amulets, or charms, with motifs believed to bring luck; coin inscriptions; signs of the zodiac; gods, demigods and auspicious animals; and charms of unusual shape and design.

Chinese numismatic charms, or talismanic charms as they are also known, are objects shaped like classical coins but without currency value. They are predominantly cast in bronze, with auspicious inscriptions, symbols and images of gods and legendary figures. They served to invite good fortune and ward off evil spirits. These coins were produced in large quantities during the Han Dynasty, and all through the Song, Yuan, Ming and Qing Dynasties. They carried a wealth of cultural content that extended into religion (such as Buddhism, Daoism and Confucianism), fine arts (such as calligraphy, painting and sculpture) and folk practices (such as the worshipping of the stars). 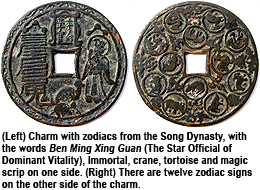 Chinese numismatic charms echoed the themes of other cultures, for instance the religious medals commonly found in Europe. They were collected and highly prized by foreign missionaries, diplomats and customs officials operating in China in the 18th and 19th centuries. Thus, these charms were housed in major museums and art galleries throughout Britain, France, Norway, the USA, Russia, the Vatican and elsewhere.

Dr Alex Fang is a collector of the Chinese numismatic charms. He is especially fond of collecting Song Dynasty charms, as the designs and craftsmanship were of a high standard. "We can learn about the history, daily life and the culture of our ancestors through the design and content of these charms. I hope we can pass the knowledge on to future generations," he said.

Professor Cheng thanked the generosity of Dr Fang for putting his collection on display, so the general public can enrich their knowledge in this area. "I am very glad CityU has this opportunity to exhibit these Chinese charms, especially as part of the celebratory events marking the 10th anniversary of the Chinese Civilisation Centre," Professor Cheng said.

The "Chinese Charms: Arts, Religion and Folk Belief" exhibition will be held at CityU Gallery from 12 July to 24 August, from 10:00am to 7:00pm daily.