The goods and services free trade deal signed between Hong Kong and mainland China, known as the Mainland and Hong Kong Closer Economic Partnership Arrangement (CEPA), was implemented four years ago. Professor Cheng Hsiao, Honorary Professor, Department of Economics and Finance of City University of Hong Kong (CityU), delivered a distinguished lecture on 5 June evaluating the economic impact of CEPA on Hong Kong. The Pearl River Delta and Yangtze River Delta Distinguished Lecture was jointly organised by the Run Run Shaw Library and the Department of Economics and Finance. 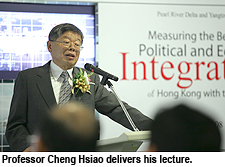 “Professor Hsiao is one of the great contemporary econometricians, known for his far-reaching papers. CityU students are so honoured to have Professor Hsiao sharing his academic viewpoints,” said Professor Kuo.

Professor Ching said in his welcoming address that there was more to a library than its traditional role of providing collections to users. “To me, the library can also serve as a bridge between authors and readers to enable each to interact in the process of knowledge creation and dissemination. Today’s lecture aims to do just that,” he said. Professor Ching also expressed his gratitude to Professor Eden Yu and his team from the Department of Economics and Finance for their efforts in making the lecture a success.

Professor Hsiao is the first academic to apply the panel data approach to an evaluation of the economic impact of CEPA’s implementation, by comparing Hong Kong with the other regions and countries, including mainland China, Indonesia, Japan, Korea, Malaysia, the Philippines, Singapore, Thailand, the United States and Taiwan. The analysis examined the comparison before and after the implementation of CEPA, i.e. from 1993 to 2003 and from 2004 to 2007. It was found that the real economic growth rate of Hong Kong rose by an average of 2.82% per year after CEPA’s introduction. 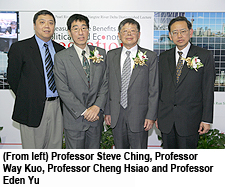 Professor Hsiao also applied the same approach to evaluate the economic impact on Hong Kong of the 1997 handover and found the change was statistically insignificant. The panel data approach allows for many units to be observed over time and is particularly useful in predicting long-term or cumulative effects.

Professor Hsiao is Professor of Economics at the University of Southern California. He is a fellow of Academia Sinica, Econometric Society and the editor-in-chief of Journal of Econometrics, an authoritative international economics journal. He has published many important econometrics papers and literature. He is renowned for his panel data approach and held in high regard in the econometrics field.