Professor (Chair) Rudolf Wu Shiu-sun, from the Department of Biology and Chemistry at City University of Hong Kong (CityU) and Director of the Centre for Marine Environmental Research and Innovative Technology (MERIT), has been appointed a member of the Joint Group of Experts on the Scientific Aspects of Marine Environmental Protection (GESAMP). 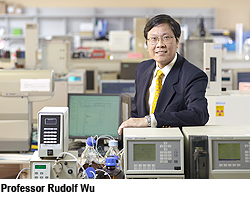 GESAMP is a high level non-governmental advisory body sponsored by eight United Nations (UN) organisations. Established in 1969, the mandate of GESAMP is to provide authoritative, independent and interdisciplinary advice to governments around the world on policies and issues relating to marine environmental protection.

Professor Wu's appointment is for an initial term of two years. At present, there are only 10 GESAMP members worldwide and Professor Wu is the only member in Asia. The appointment is in recognition of Professor Wu's extensive experience and achievement in the field of marine environmental research, and also underscores the international status of CityU's scholars and researchers.

Professor Wu said he was proud to serve on GESAMP, which has contributed significantly to the protection and sustainable use of the global marine environment.

Among the issues he intends to bring to the attention of the international community and policy makers through GESAMP is world-first CityU research that shows oxygen depletion (hypoxia) can lead to sex imbalance in marine fish populations.

Hypoxia is a growing problem worldwide mostly caused by pollution, such as excessive input of nutrients, agricultural wastes and domestic waste water, into the seas. 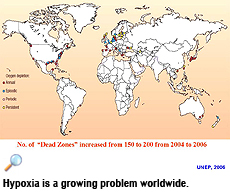 "Hypoxia can have long-lasting devastating impacts on marine ecosystems over very large areas if not handled in a timely and proper manner. It is hoped that through the efforts of GESAMP, governments can be alerted to the problem and take appropriate measures to address it," Professor Wu said.

In addition to his international role, Professor Wu is also instrumental in introducing new initiatives to more effectively manage the marine environment in Hong Kong and the region, among them the use of bio-indicators to assess the impact and risk of pollution on marine ecosystems.

A commonly-used method of assessing marine pollution is to measure the concentration of pollutants, such as heavy metals or toxic chemicals, in sea water and sediment. Higher levels indicate more serious pollution. However, the results cannot tell how these pollutants may affect marine organisms.

There is an increasing trend worldwide of using bio-indicators - marine species that exhibit certain specific molecular or biochemical responses to changes in environmental conditions - to monitor the health of the marine environment.

Professor Wu and his research team at MERIT have led bio-indicator studies in Hong Kong and the region. Recently, his team has developed a suite of 13 bio-indicators for the Hong Kong SAR Government in an $8.3 million consultancy for practical use in marine pollution monitoring, a first in the Asia-Pacific region. The Government fully adopted their recommendations and has included all the 13 bio-indicators into their routine monitoring programme.

In another $4.5 million government consultancy, he is leading a team to develop a suite of chronic toxicity tests for toxicity evaluation, risk assessment and pollution control in Hong Kong and the region.

"Bio-indicators are more effective in monitoring the impact of pollutants on marine ecosystems, and it is encouraging that the Government has begun adopting this approach in their marine monitoring programmes," Professor Wu said.