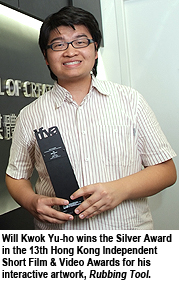 Will Kwok Yu-ho, a Year 1 student in the Master of Arts in Creative Media programme, won the Silver Award in the Single-Screen-Based Interactive Media Category for his work entitled Rubbing Tool. By providing multiple contact points on a table, the work simulates constantly-changing scenes of ants moving cake crumbs and enables participants to squash the insects. 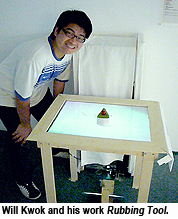 Despite the game’s apparently aggressive overtones, Will is keen to use it to make a poignant commentary on social issues. “There is now a serious disparity between the rich and the poor, with workers around the world being exploited by employers. While amassing tremendous resources, big corporations not only reap the resources but also stop others from ever accessing much-needed material gain. It is very similar to what we will do with a piece of unwanted cake. We are not only unwilling to share it with the ants but will even kill them ruthlessly. Ironically, in our life, we are actually in the same situation as the ants,” said Will. He argued that there was really little difference between human society and the world of nature but many people failed to realise this. 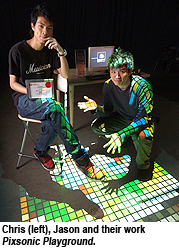 Chris Cheung Hon-him and Jason Lam Chi-fai, both Year 3 undergraduates of SCM, made use of new media technology to produce an interactive installation work entitled Pixsonic Playground. Their creation can isolate and extract image elements and transform them into music and motion. Participants of the game need to first select an image from a series of images and videos provided by the website Flickr. Then, when they step into a space where the image is projected and move their bodies, a small square on the image will rotate and produce musical tones.

“There are more rules and constraints for the composition of traditional music. But our work breaks these rules and allows more variations of composition. This is just the idea of ‘breaking the old rules’, as advocated by SCM,” said Chris. His teaming up with Jason was an opportunistic move, as Chris loves playing music and Jason excels in using different media technologies to create multimedia artworks. 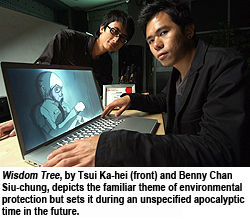 The award-winning animation Wisdom Tree, by Benny Chan Siu-chung and Tsui Ka-hei, depicts the familiar theme of environmental protection but sets it during an unspecified apocalyptic time in the future. It tells the story of a girl who joins protests against a mega-corporation that undertakes many construction projects that seriously damage the environment. The girl is arrested and imprisoned. In order to escapes, she takes a drug given to her by an old tree but still perishes in the end. Tsui Ka-hei said the work was intended to criticise the destruction of the environment by global corporations.

There were six entries in the Single-Screen-Based Interactive Media Category and 10 in the Animation Category selected for this year’s ifva awards. Mr Byran Chung Wai-ching, Lecturer of SCM and one of the adjudicators of the Single-Screen-Based Interactive Media Category, said he was optimistic about the future of the new media industry in Hong Kong. “New media technology can now be applied to many areas, including construction, personal and household items and entertainment,” said Byran. However, he indicated that many local products were still only following overseas trends. He said different organisations, including educational institutions, the government and investors, should work together to formulate a long-term strategy to promote the development of new media creative works so that this budding industry could prosper.