The Asia Pacific Law Review, a journal of the School of Law (SLW) at City University of Hong Kong (CityU), has become the first Asia-based law journal to be included in the Social Science Citation Index (SSCI), the world-renowned database of Thomson Scientific. The recognition reinforces the reputation of the School, as well as CityU as an international institution. 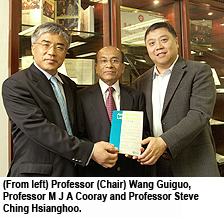 Recalling the journal’s beginnings in the early 1990s, Professor (Chair) Wang Guiguo, Dean of SLW, said he was delighted to hear that it had received its richly deserved recognition. “The journal’s standing reflects the School’s determined efforts to be a leading centre of education and research in the Asia Pacific region,” said Professor Wang.

Professor M J A Cooray, Associate Dean of SLW and the journal’s editor in chief, regarded the inclusion of the journal in the SSCI as worthy recognition of the very high standard the journal has 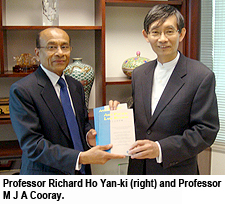 maintained. “We will continue to publish cutting-edge articles dealing with legal issues of regional interest but with a global reach,” said Professor Cooray.

With the stated mission of facilitating the dissemination of academics’ works to the research community, Professor Steve Ching Hsianghoo, University Librarian, started working with Thomson Scientific in 2004 to have the Asia Pacific Law Review included in the SSCI. He explained that SSCI, unlike other freely available search engines, provides a structured and efficient platform for accessing the world’s leading social 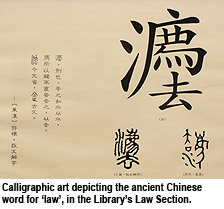 science journals and has always been regarded accordingly in the scholarly world. Being included in SSCI will help the journal reach out to more professionals. The Library will continue to pursue collaboration with academic departments in promoting not only the University’s journals, but also other research output, such as conference proceedings.

“In addition to SSCI, we will also explore other prominent channels, such as Scopus, another citation database of research literature and quality web sources. The newly formed Collection Development Unit is pleased to provide different kinds of assistance to faculty members in this regard,” said Professor Ching.

The Asia Pacific Law Review, based in the SLW, commenced publication in 1992 and has published articles by leading scholars from all parts of the world. It has also attracted articles by eminent judges and world-renowned practitioners. Articles in the journal include Making Law in the Courts by Justice Kemal Bokhary, Permanent Judge of the Hong Kong Court of Final Appeal; Arbitration: 1979 and All That by Sir Thomas Bingham, Master of the Rolls (later the Lord Chief Justice of England and Wales), Comparative Law Teaching and Scholarship: Methods and Objectives by the late Professor Mauro Cappeletti of Stanford University; The Rule of Law in Hong Kong: Immigrant Children, the Court of Final Appeal and the Standing Committee of the National People’s Congress by Dr Mark Elliott and Professor Christopher Forsyth of Cambridge University; and Contemporary Challenges of Law: Religion and National Security by Professor Shimon Shetreet of Hebrew University of Jerusalem, Israel.

The last two issues of the journal published in 2007 carried a selection of papers presented at the international conference organised by SLW to celebrate the 10th Anniversary of Hong Kong’s Basic Law. The journal will continue to publish papers presented at conferences that the School holds to promote critical analysis of current legal issues.