Wong Wai-nap, a second year student from the School of Creative Media (SCM), who co-produced the film Distance with other 10 students, won a Special Mention in the student division of the Third Fresh Wave Short Film Competition, which is organised by the Hong Kong Arts Development Council and the Hong Kong International Film Festival Society. 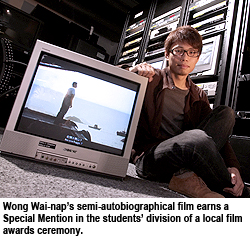 The short film is loosely autobiographical, focusing on a father-son relationship. The father is a fisherman whose livelihood is affected by a government restriction on fishing. Depressed, the father takes his son to dine with friends, gets drunk and requires his son to help him home. The emotional walk home becomes the central premise of the movie.

Wong Wai-nap said filming on the boat was the most challenging task in the project. “We had to overcome strong wind and coordinate filming with the timing of the local fishing boats. The whole process went very smoothly in the end and the whole crew was satisfied,” he said. 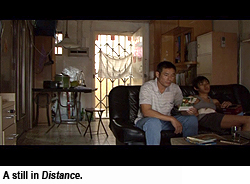 “I wish to devote myself to the film industry not only in Hong Kong, but on the mainland and in Taiwan, working with different people to widen my perspective,” he said. Apart from the award organiser, he especially thanked SCM staff, namely Mr Patrick Tam Ka-ming, Associate Professor, Mr David Yip Kei-man, Assistant Professor, Miss Rita Hui Nga-shu, instructor, plus the whole crew and his family.