City University of Hong Kong (CityU) is to confer the title of Honorary Fellow on four distinguished persons in recognition of their distinctive contribution to the development of, and service to, the University.

Upon the recommendation of the Honorary Awards Committee of the Council, Dr Norman Leung Nai-pang, Pro-Chancellor of the University, has approved the conferment of the title of Honorary Fellow to Mr Edward Cheng Wai-sun, Mr Karl C Kwok, Mr John Lee Luen-wai and Ms Marina Wong Yu-pok. The Honorary Fellow Presentation Ceremony will be held on 18 June 2008.

In addition to being key supporters of the University, the four Honorary Fellows are leading members of their respective professional communities, who have tirelessly dedicated themselves to public service and the well-being of society. 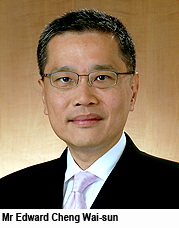 Mr Edward Cheng, Deputy Chairman and Chief Executive of USI Holdings Limited, has more than 20 years of experience in business, law and finance and is an active participant in public service. He graduated from Cornell University with a bachelor degree in political science and economics, and Oxford University with a bachelor degree in jurisprudence and a master degree. He is a Justice of the Peace and was awarded the Silver Bauhinia Star by the HKSAR Government. His public service experience spans many fields including urban renewal, housing, finance, corruption prevention, technology and education. Mr Cheng is currently a member of the Advisory Committee on Corruption with the Independent Commission Against Corruption, and he was the former Chairman of the Urban Renewal Authority. He served on the Council of CityU from 2003-2007. 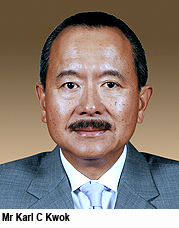 Mr Karl C Kwok, Chairman of Wing On Company International Limited, has enjoyed a long relationship with the University. He served on the University Council and its committees from 1998-2006. He has made a great contribution to the development of the University. He graduated from the Carleton College with a bachelor degree and received his MBA from the University of Pennsylvania. Regarding his public service, Mr Kwok is Chairman of Hong Kong America Centre, Founding Officer of the Wharton Club of Hong Kong, Vice President of Sports Federation and Olympic (Hong Kong, China), President of Hong Kong Sailing Federation, and a member of the 5th East Asia Games 2009 Planning Committee.

Mr John Lee is the Managing Director and Chief Executive Officer of Lippo Limited and is also an Executive Director of Lippo China Resources Limited and Hongkong Chinese Limited. A qualified accountant by profession, he has extensive experience in corporate finance and capital markets and was a partner of PriceWaterhouse for 12 years. Mr Lee is active in public and community services and was appointed Justice of the Peace in 2003. He is a member of the Hospital Authority, Chairman of the Hospital Governing Committee of Queen Elizabeth Hospital and a member of the Non-local Higher and Professional Education Appeal Board. He served on CityU’s Council from 1998 to 2007. 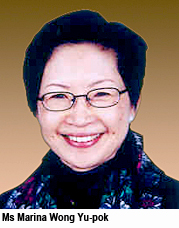 Ms Marina Wong had been with PricewaterhouseCoopers for over 30 years specializing in China tax and business advisory services, and has extensive experience in advising both Hong Kong and foreign investors in the structuring of their businesses and investments in PRC. Ms Wong joined Tricor Services Limited as a director from 2004 to 2006 after her retirement as a partner from PricewaterhouseCoopers. She was appointed Justice of the Peace in 2004 and is an active participant in public service and serves on a number of government advisory committees and community organisations. She is a member of the Broadcasting Authority and the Advisory Committee on Post-service Employment of Civil Servants, Vice-Chairman of Hong Kong Federation of Women, and a special appointed representative from HKSAR to the All China Women’s Federation by the PRC Government. She has been supportive of CityU, serving as a Council member from 1999-2005 and a current member of the Executive Committee of CityU Professional Services Limited.