An electronic engineering student from City University of Hong Kong (CityU) has been awarded a prestigious scholarship by the IEEE Microwave Theory and Techniques Society (MTT-S) in the United States. He is among just 10 students worldwide, and the only one from Hong Kong, to receive the honour this year. 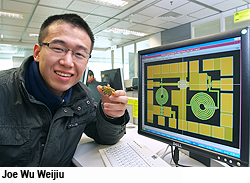 Joe said his research would have implications for Bluetooth front end technology and the broader wireless communications sector. By improving the signalling efficiency of hand-held devices such as mobile phones, Joe’s award-winning design could markedly improve the duration a rechargeable battery remains operational.

Joe paid homage to his mentors at CityU, including Professor Chan Chi-hou, Chair Professor of Electronic Engineering (EE) and Dean of CityU’s Faculty of Science and Engineering.

“Professor Chan’s technical and theoretical prowess amazes me. He is such a well rounded supervisor, who is always available whenever necessary. Without his guidance, this project would not have been possible,” said Joe. “I would also like to thank the University for three years rigorous training that has taken me from technical naivety to this level of proficiency. I feel indebted to the University for giving me this opportunity,” said Joe.

The former Shanghai undergraduate student was granted a scholarship to study in Hong Kong for three years. “I selected CityU because its EE department is particularly famous in the Asia Pacific Region,” explained Joe.

Irrespective of the support he has benefited from the University, Joe’s efforts in achieving this recognition are based on hard work and a refusal to bow to obstacles in his path.

“Nobody in the research group had prior research experience in Doherty Architecture, so I had to fumble my way through with perseverance and hard work,” said Joe.

The Doherty amplifier architecture has, in less than five years, become the amplifier of choice for new wireless transmitters, after essentially laying dormant since first being described by W.H. Doherty in 1936.

“Joe is a diligent student who can conduct independent research and this is a well-deserved award for him. This is the third time our students have received a scholarship award from the IEEE MTT Society, and we are very proud of their achievements,” said Professor Chan.

The IEEE MTT-S is a transnational society that promotes the advancement of microwave theory and its application.