CityU hosts conference on the languages taking on the world

Over the past few decades, the English language has been expanding as the need grows for a common form of communication to facilitate trade and cultural exchange. But other languages, notably Chinese and Spanish, have also been moving in the same direction, albeit from very different starting points.

The Halliday Centre for Intelligent Applications of Language Studies (HCLS) of City University of Hong Kong (CityU) is holding an international conference on “Becoming a World Language: the growth of Chinese, English and Spanish” from 5 to 7 December.

More than 50 plenary and addresses and lectures are scheduled as part of the “1st HCLS Conference on Becoming a World Language: the growth of Chinese, English and Spanish”, exploring the significance of a language transforming into a world language. Linguistics experts from all over the world have assembled to address some of the little-known effects of this phenomenon on the world’s speakers, speech communities and language systems. 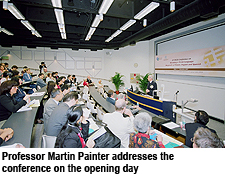 In his opening address, Professor Tong said it was appropriate for a conference on Becoming a World Language to take place in Hong Kong as it was truly “Asia’s world city”.

“Ten years on since Hong Kong's return to China, both English and Putonghua have come to play leading roles in this globalised community. Far from decreasing in importance in post-colonial Hong Kong, the English language is in fact flourishing, with the number of people speaking the

Professor Webster welcomed the first plenary speaker, Professor M.A.K. Halliday, Emeritus Professor of Linguistics at the University of Sydney and adviser to HCLS of CityU, whom he described as “the world-renowned linguist who for more than half a century has been enriching the discipline of linguistics and its application in areas such as education, computer science and policy-making.”

Speaking during his opening plenary address on “Some Social-semiotic Reflections on Language Growth”, Professor Halliday said, “Chinese, English and Spanish are the three languages that have grown largest in terms of their deployment in the world today. The conditions that have brought about this growth are social and economic: people have moved into new regions and taken their language with them.”

Discussing what he described as the relatively recent emergence of English as the predominant international language and the way in which languages spread, Professor Halliday said one of the greatest challenges facing Putonghua’s emergence was its difficult written language. “The writing system is difficult for non-Chinese to comprehend but software advances may help overcome these obstacles,” he said.

Among the myriad topics under discussion during the conference were:

Some speakers were also looking at the expansion of the third most prevalent language in the world. Spanish language entered Chinese universities in the early 1950s. With the coming of the new century, the great transformations taking place in China and its role in the international arena have sparked a boom in interest in Spanish, in parallel to the expanding importance of Spanish, as well as Chinese, in the rest of the world. More than 2,000 undergraduates currently do their major degree in Spanish with as many learning it as their third language in more than 20 mainland universities. The language has truly emerged as “world language” in China.