CityU holds a conference on globalisation and humanity 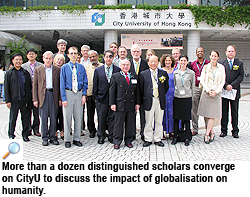 The first “International Conference on Ideas of Humanity in the Age of Globalisation” in Hong Kong, organised by the Department of Chinese, Translation & Linguistics of City University of Hong Kong (CityU), was held from 18 to 21 November at CityU.

More than a dozen distinguished scholars from Europe, USA and Asia gathered to discuss the impact of globalisation on humanity from the perspectives of history, culture, sociology and philosophy, and to examine ways of promoting cross-cultural exchanges. 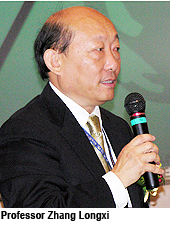 CityU and organiser of the conference, said the impacts of globalisation - partly good and partly bad, partly encouraging and partly threatening - had wider implications in the areas of economy, political science, sociology and cultural studies.

“The quantity of communication is increasing in the age of globalisation. On the other hand, resistance in the name of the local, the indigenous and the traditional is also rising. Conflicts between the global and local are becoming more and more obvious,” Professor Zhang said. “It becomes a serious responsibility for intellectuals everywhere to reformulate the very idea, or ideas, of humanity, so that we may hope to make what we do relevant to what is happening in the world of real consequences.”

Professor Martin Painter, Acting Dean, Faculty of Humanities and Social Sciences of CityU, welcomed the participants during the opening ceremony on 18 November and said he hoped the conference would offer a valuable exchange of experience.

Professor Jonathan Webster, Head of the Department of Chinese, Translation and Linguistics of CityU, posed the introductory question: “Does globalisation represent a threat to humanity?” He said scholars had made the point that an emerging society could not be built if at the same time, the cultural foundations that cement society and give it the self-confidence and the cohesion to interact properly with the world were undermined. This was why a conference on the theme of humanity in the age of globalisation was both necessary and timely, Professor Webster said.

The conference was sponsored by Kulturwissenschaftliches Institut in Essen (Institute for Advanced Study in the Humanities).