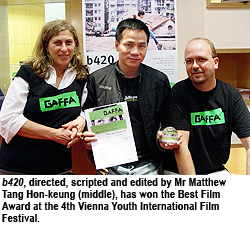 The independent film b420, directed, scripted and edited by Mr Matthew Tang Hon-keung, a 2004 master degree graduate of the School of Creative Media at City University of Hong Kong (CityU), has won the Best Film Award at the 4th Vienna Youth International Film Festival.

The Vienna Youth International Film Festival, organised once every two years, aims to encourage more films based on the theme of youth. Entries were submitted from 12 countries and regions this year. 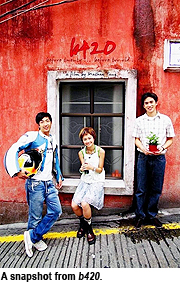 b420 conveys the dual meaning of "before twenty" and "before too old". The lives of the three main characters criss-cross, as teenagers and good friends Koey, Willy and Simon mesh their divergent personalities. The film reveals the nature of human relationships in light of the considerations of love and death. Up-and-coming actors Miki Yeung, Sam Lee and Ben Hung play Koey, Willy and Simon.

Since completing his master's programme at CityU, Matthew has kept himself busy working in the film industry. He hopes to assume the director's reins again and produce films encompassing a range of themes.