Hitching a ride on the road to quality

As part of Hong Kong’s commitment to providing international standard higher education, each tertiary institution in the city will be subjected to a rigorous audit process focusing on the quality of the educational service provided.

In 2010 CityU will have its turn to impress the Quality Assurance Council (QAC), 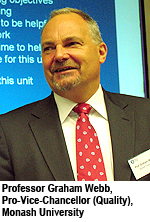 which was established under the aegis of the University Grants Committee, that its programmes are adhering to sound quality assurance practices.

Two guest speakers from Melbourne’s Monash University, Professor Graham Webb, Pro-Vice-Chancellor (Quality), and Ms Robyn Harris, Director, Centre for Higher Education Quality, addressed CityU staff on 12 November on how best to tackle the audit process based on their own valuable experience in successfully completing the process in Australia.

Introducing the seminar ‘Road to Quality - the Monash Experience’, Professor (Chair) Paul Lam Kwan-sing, Acting Vice President (Undergraduate Education), said the new audit process in Hong Kong was based on that used in Australia and as such Monash University was a logical source of expertise.

“Quality is central to City University in fulfilling its vision of becoming a leading university in professional education and applied research in the world. We appreciate very much the opportunity to learn from Monash University, which has a lot of valuable experience in developing a quality culture in higher education,” he said.

Professor Webb said the new format for the auditing process reflected the changes taking place in university education around the world. The structure of the audit was no longer a checklist of criteria to be met but a way of asking ‘What are you trying to achieve?’

“I have seen very good universities doing very good work and put in bad audits and they have suffered for it as a result. So it is important to present yourself in the best possible light,” said Professor Webb.

Ms Harris stressed that one of the keys to implementing mechanisms for promoting and improving the quality of teaching and learning was for universities to collate adequate data on student satisfaction through questionnaires. But merely collecting the data was not enough.

“The idea that all we have to do is just collect data and change will automatically occur is nonsense, of course. Students need to see changes to appreciate that responding to the surveys is worthwhile. There needs to be some follow-up by the university to show students just how the university has responded to their comments,” said Ms Harris. 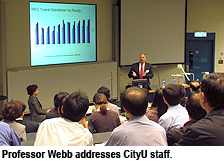 In order to ensure a systematic improvement, universities had to have clear accountability (especially at the level of Faculty / School Dean and Head of Department), clear targets (through a simplified reporting system that identified problem areas) and clear support (in the form of data and analysis).

The seminar was co-hosted by the Office of the Vice President (Undergraduate Education), CityU's Quality Assurance Committee and the Value For Money Committee (VFM).

The UGC's QAC works with institutions in partnership for the sake of benefiting the higher education sector as a whole but institutions remain independent and responsible for the quality of their own programmes.

The UGC is committed to safeguarding and promoting the quality of UGC-funded institutions and their activities. In recent years, the institutions have been expanding 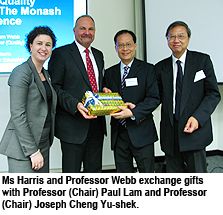 their activities, and there has also been growing public interest in quality issues. The QAC was established on 1 April 2007 to assist the UGC in providing third-party oversight of the quality of institutions' offerings.

The University formed VFM in 2005 to look at the process of planning and resource allocation in academic and administrative departments.

The UGC has previously conducted a review of universities in the form of ‘Teaching and Learning Quality Process Review’ (TLQPR). The first such review of CityU was conducted in 1997 and the second in 2003.